The Bengali community (especially students and young people) in Bangalore rose up in solidarity against the recent state violence on students of Jadavpur University. On the 17th of this month, male students were beaten up and girls students molested in a barbaric dead-of-the-night police assault on the students carrying out a peaceful sit-in demonstration. The students were particpating in a non-violent protest demanding an impartial probe into an incident of sexual harrassment of a student at the University earlier last month. An eye-witness account of what happened in Kolkata including the role of goons from Trinamool Congress (TMC) can be found on our website here

The protest was organized by a group of Bengali students, including ex-Jadavpur university students working in the city. The protest drew a good response from the Bengali community, students and young working professionals in the city participating in the protest. Ho Ho Hokolorobo was the mostly widely heard slogan as the 400-strong crowd raised slogans in both Bengali and Kannada denouncing the brutal police apparatus, the equally and completely complicit state government as well as both the major political parties in West Bengal – CPI(M) and TMC. The protesters demanded the resignation of the VC of Jadavpur University as well as impartial probes into the sexual harrassment incident and the police brutality on 17th of September. The young crowd raised powerful slogans and sang songs of solidarity and protest. Few of the ex-students from Jadhavpur university delivered speeches and gave detailed updates on the events happening in Kolkata. The protest lasted for over three hours with the same infectious enthusiasm and energy.

These rhetoric quotes helped him get applause from the audience; however, today, workers in Information Technology industry are experiencing uncertainty because of a layoff program initiated by the top management in the industry. The following article is regarding the layoff issue in IT Industry, especially in Tata Consultancy Services (TCS) and written by Raj (name changed), an IT industry employee. 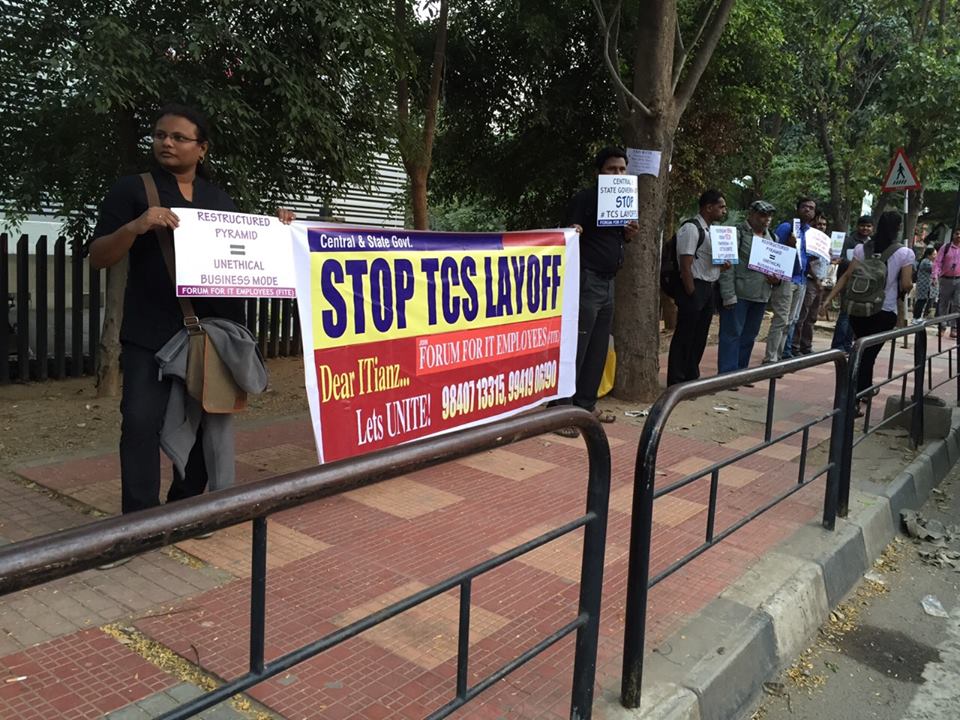 Belgium: In Solidarity With JNU

7 March 2016 News
A demonstration was organized in Antwerp on 4th March in solidarity with the protesting students of JNU and the jailed student activist leaders in India. People from multiple ethnicities and backgrounds, from Indians, Pakistanis, Kashmiris, Sri Lankans to Belgians, demonstrated against repression of students and their democratic voices by the right-wing BJP-led government in India. The comrades participated in the protest in spite of heavy rains in Belgium. The protest was supported by LSP, Tamil Solidarity, and progressive Kashmiris.

The repression of students in JNU by the communal forces of the BJP-RSS is a continuation of the BJP-RSS attack on secular, progressive and democratic elements in the country. The jailing of JNU students was preceded just weeks earlier by the murder by suicide of Dalit student Rohith Vemula by the HCU administration at the behest of the HRD ministry. The past 20 months of the BJP government has seen protests from people all over India – farmers (against land ordinance bill and continuing agrarian crisis), workers (against neoliberal policies), students (against cuts in education and crushing of dissent), and secular forces (against communal attacks).

On the pretext of a 10-member meeting organized by students on the judicial killing of Kashmiri Afzal Guru in 2013, and the basis of what later turned out to be a doctored video, the government unleashed police forces on JNU to arrest students Kanhaiya Kumar, Umar Khaled and others, terming them as anti-nationals. Right-wing goons beat Kanhaiya Kumar in court premises while the police was watching, in front of national media. The incident has  backfired for the ruling establishment with a huge oupouring of support for students in across India and abroad.

The protesters demanded for:

The following protest in Bangalore, organized on 22nd July, to condemn the recent murderous attacks on Dalits in Una of Gujarat and Koppa in Karnataka, two more added to the long list of oppression that the Dalits suffering in this country. The present regime at the centre led by Modi/BJP has undoubtedly taken a shameful supportive stand to these attacks, and many times directly instigates by issuing demeaning statements on Dalith community and its popular leaders.

The destruction Dr. Ambedkar Bhavan in Bombay by the casteist administration is another indication of the increase of wanton disrespect and derogation shown to the to the entire community of the oppressed who see Dr. Babasaheb as their natural leader.
These attacks need to be robustly condemned and a resistance is built against the communal and casteist forces.

Listen to Jagadish G Chandra from the New Socialist Alternative (CWI-India) on the Dalit protests in Gujarat sparked by the Una flogging incident.