WHAT IS THE WAY FORWARD FOR THE ENVIRONMENTAL MOVEMENT? — CALLS FOR SYSTEM CHANGE ECHOED THROUGHOUT THE PEOPLE’S CLIMATE MARCH 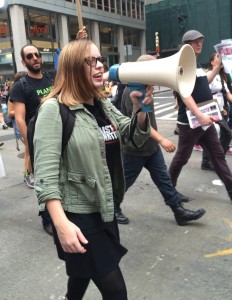 Upwards of 400,000 people participated in the People’s Climate March in New York City on Sunday. Billed as the largest climate change march in U.S. history, it far surpassed organizers’ original estimate of a 100,000 person turnout. The march was not only massive in size but also had a huge number of youth participants. It was a key moment in the radicalization of a generation. Huge numbers of students – one contingent alone had over 50,000 people in it — were also present, they had been bussed in from all over the country. While many of them held signs that vaguely said, “Youth Choose Climate Justice,” there were also many who held bolder signs that read, “Youth Choose System Change.” read more

The referendum has turned British politics upside down – even though the No vote won. The Yes campaign became a mass mobilisation of working-class communities: against austerity and rotten establishment politics, and for a positive future. This turning point raises key issues for socialists, writes PETER TAAFFE. read more

The Bengali community (especially students and young people) in Bangalore rose up in solidarity against the recent state violence on students of Jadavpur University. On the 17th of this month, male students were beaten up and girls students molested in a barbaric dead-of-the-night police assault on the students carrying out a peaceful sit-in demonstration. The students were particpating in a non-violent protest demanding an impartial probe into an incident of sexual harrassment of a student at the University earlier last month. An eye-witness account of what happened in Kolkata including the role of goons from Trinamool Congress (TMC) can be found on our website here  read more

Students Rise-up Against police brutality inside the Jadavpur University

The following article is an eye witness account by a student activist from Kolkata – Zadok Allen{{1}} on the very recent police atrocity (backed by TMC state govt.) on students protesting against sexual violence at Jadavpur University in West Bengal.

The New Socialist Alternative (CWI-India) absolutely condemns the Trinamool Congress backed State Terror and stand in complete solidarity with the students of Jadavpur University. Today we participated in the solidarity protest held in Bangalore were over 200 people participated. A short report and video of today’s event will follow soon. read more

Scotland: 10 days that can shake British capitalism to its foundations

“In the past four weeks support for the union has drained away at an astonishing rate. The Yes campaign has not just invaded No territory; it has launched a blitzkrieg.”

For the first time during the campaign an opinion poll has shown the Yes side ahead, in this poll by 51% to 49%. The YouGov survey for the Sunday Times, published on September 6, has sent shock waves through the capitalist political establishment in Britain. read more