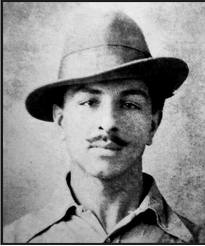 PCMC{{1}} workers’ union and New Socialist Alternative (Pune) along with few other like minded organizations in Pune organized a rally to commemorate 82nd death anniversary of the legendary Bhagat Singh, Sukhdev and Rajguru on 23rd March. Though mass media and ‘official’ history texts ceaselessly endeavors to project them as ‘patriots’ or ‘nationalists’, truth is these revolutionaries fought against not only imperialist British power but also capitalists and casteist Indian elites by audaciously upholding the ideas of socialism to ensure ‘true’ independence. The very act of throwing bombs and leaflets in legislative assembly was undertaken to register their protest against Trade Dispute bill that attempted to trample the rights of workers. The purpose of the rally was to introduce workers to this glorious and unique chapter in the Indian independence struggle.

The rally started at 10.30 am from Pimpri chowk by garlanding the statue of Dr. B R Ambedkar. Around 40 odd Workers from various industrial units in the city gathered there. At the starting point we came across workers from the rag pickers association staging protest against contract system. We stopped over and offered our full support to the protest. Members of New Socialist Alternative- Pune sang revolutionary songs offering solidarity. The rally moved over to Bhagat Singh smarak at Dapodi (Pune). We sang revolutionary songs followed by brief speeches after garlanding the statues of Bhagat Singh. While the rally was organized in the morning and hence was attended by only the afternoon shift workers, we organized one more program for morning shift workers as well. In the evening we screened a documentary on Bhagat Singh and discussed about the vision of Hindustan Socialist Republican Association (HSRA) and how India under Congress swept these ideas aside after independence. At the end of the program, workers were inspired to know about the rich legacy of revolutionary struggles and wanted to take this vision forward.