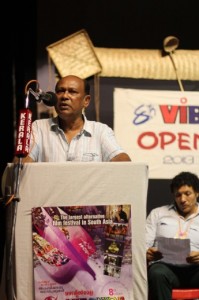 New Socialist Alternative (CWI -India) intervened at the festival, by setting up a stall and selling our publications. Comrade Siritunga Jayasuriya of United Socialist Party (CWI -Sri Lanka) inaugurated the event with several other guests.

With ‘Stolen Democracies’ being the focus of the year, discussions were held at Sangeeta Nataka Akademi, the venue of the festival. The festival was flagged off with the C.Saratchandran Memorial Speech by Prof. Larbi Sadiki, a Tunisian thinker, writer and poltical scientist who spoke about ‘Arab Spring’. Concentrating on Koodankulam Nuclear Power Plant issue, AFSPA amongst other social concerns, VIBGYOR became a platform for socially aware and active people to interact and discuss. This edition of VIBGYOR also congregated with URANIUM Film Fesival, a travelling film festival, screening films on Nuclear Energy and its ill effects. Comrade Siritunga also led off a discussion, talking about the Sri Lankan situation. A campaign in solidarity with the protests in Koodankulam was initiated at VIBGYOR this year, featuring a discussion with Xavieramma, a protesting resident of Koodankulam ground zero – Indianthakarai.

VIBGYOR Film Festival also screened some excellent social films and documentaries. Films of Kesang Tseten, a Film maker from Nepal and Meera Jain were retrospectives of the 8th edition.

Photos from Our Intervention at Vibgyor