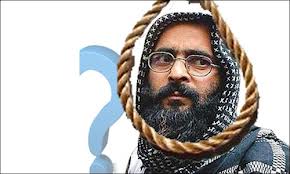 In what was clearly a political decision, Afzal Guru was hanged on 9th Feb at the infamous Tihar jail in Delhi for his alleged role in the 13th December, 2001 attack on the parliament. Not only was this merely an issue about the merits or de-merits of death penalty, but was a clear case of the Indian State trying to set an example out of Afzal Guru’s execution as a warning to the people of Kashmir.

This secretive execution (that was totally unlawful) that was carried out was a gross abuse of the basic human rights and dignity in every sense of the term. Afzal Guru was not allowed to meet his family members before his execution. He was informed of his execution at 5 am in the morning of 9th February. While the letter informing his family in Kashmir about his imminent execution was drafted on 6th February by the jail superintendent, the letter was deliberately sent via post only on 8th February (with no chance of ever reaching the family before the execution date).

Even the sentence handed out to Afzal Guru was grossly disproportionate to his alleged role in the 2001 attack on the parliament. With the entire case still shrouded in secrecy and many questions left unanswered, even if we were to accept Afzal Guru’s role in the whole affair, this unjust handing of the sentence clearly took political precedence over jurisprudence with the Supreme Court outrageously describing its decision so as to satisfy the “conscience of the society”.

Some of his interviews in the media or his extremely dignified behavior even during his last moments before the hanging, all points out towards a man who was the very opposite to the hardcore jihadist as is generally portrayed. Afzal Guru was clearly a product of his upbringing in the conflict ridden climate of Kashmir in the last three decades. Yes, for a time Afzal dabbled with armed struggle of the JKLF variety (early 90’s), but was very soon disillusioned and later surrendered himself to the Indian security forces. What followed next perhaps best illustrates the inhumanity of the Indian army’s role in Kashmir. According to some of his interviews to the media, Afzal has stated that he was repeatedly tortured, hounded and harassed for an entire period by the Indian security forces even after his release, which is a daily reality for many in Kashmir even today.

While the role of the jihadi extremist groups in the December 2001 attack seems pretty certain, what role Afzal Guru played is definitely a question mark. Did the Indian intelligence knew in advance about an imminent attack on the parliament, but chose not to act so as to deliberately use the attack as a justification for its own political ends? Was Afzal deliberately implanted or even co-opted in the cat and mouse game of intelligence and counter-intelligence? Given the fact that Afzal Guru was not given a proper chance to defend himself and was not even allowed to be represented by a lawyer of his choice, it looks like the Indian establishment wanted to make a scapegoat out of him to hide their own misdeeds.

India, which was then ruled by the communal, right wing BJP led NDA government, used the attack as a justification for amassing 700,000 troops in Kashmir along the LOC that threatened to ignite into a full scale war with Pakistan. While the buildup was later de-escalated following pressure from the United States, Afzal Guru along with his cousin Shaukat Guru and Delhi University Professor SAR Geelani were named as the prime accused in the parliament attack case. While all the three men were sentenced to death, Geelani was acquitted by the court and Shaukat Guru Sentence was commuted to ten year rigorous imprisonment (but later let off), only Afzal Guru’s death sentence was upheld by the Supreme Court in 2005.

The timing of the hanging was also a political decision influenced by various factors. From the 2014 elections point of view, the Congress is clearly trying to build up an image of being tough on terrorism and even policy decision making, instead of being seen as lame and indecisive as is generally portrayed in the corporate media. The sudden haste with which it carried out Ajmal Kasab’s hanging in a similar manner late last year, the sudden whip up of nationalistic chauvinism along the LOC last month, or even the big bang neo-liberal reforms in the last period all point out that Congress is clearly trying to go on the offensive come what may.

But this upping the ante by the Congress could end up having the opposite effect to what was intended. This Congress led UPA govt. could instead end up as one of the most unpopular government ever. But given the little or no choice that Congress actually has in the current political climate, they have decided to take the plunge. As we have stated in all of our previous articles, more such attacks – social, political & economic – not only to oppress but also divide the working people of India will be in the offing.

The coming period will witness significant changes in the consciousness of the working class in the face of an all around attacks on their living standards. The fact that, except for the right wing communal elements, Afzal Guru’s hanging was not greeted with all round cheers everywhere, but with skepticism from many quarters is a pointer in that direction. Jantar Mantar in Delhi would have witnessed an even greater protest by students and youth against the hanging had it not been for the twin terror campaign by the notorious Delhi police together with the Hindutva forces that have managed to brow beat any further signs of protests for now.

As for Kashmir, the sudden hanging of Afzal Guru has predictably ignited protests which as usual have been clamped down brutally by the CPRF. While the unjust hanging has definitely shaken the lull in the movement demanding freedom in the last 3 years, but it remains to be seen whether this act of the Indian State can once again re-start the protests all over again.

The New Socialist Alternative (CWI-India) absolutely condemns the unjust hanging of Afzal Guru. The fight for the abolition of the Death Penalty must be intensified now along with other important issues concerning working people today. All the political pointers indicate that the President and former Congress Union Minister – Pranab Mukherjee appears to be a man in a hurry and is all the more likely to be pro-active in file clearances or on policy matters. As we have stated in our leaflet published on September 2011 “Death Penalty is no deterrent to the crimes that are perpetrated on a regular basis, it has to be replaced with more humane democratic mechanism of justice system against outlaws, it is fundamentally a question and challenge before us to create a society and system which ends all forms of systemic violence, practiced both by the state and non-state actors.”