The System’s utter negligence, the only reason of the gruesome death of the Construction Workers

Seven Construction Workers were killed and several others were seriously injured in a disastrous accident at the Bluegrass Business Park construction site in Shastrinagarh, Yerawada, Pune on February 3, 2022. This has once again raised the issue of inefficient, reckless and corrupt management of various state mechanisms responsible for the safety of construction workers and the working class in general.

07 February, 2022 marked a glorious and momentary day with regard to the Construction Workers Movement in Pune. Led by Shramik Hakka Andolan (Labour Rights’ Movement affiliated to New Socialist Alternative) and Bandhkam Kamgar Sanghatna (Construction Workers’ Union), more than 100 Workers marched to politically demand the fundamental transformation of their conditions. New Socialist Alternative has worked tirelessly and committedly in the construction workers in the past 1 year or so. And through this New Socialist Alternative built the Trade Union
Shramik Hakka Andolan. Together they have built a rock-solid movement in construction workers in the recent past. Demanding for raising the qualities of their safety, their welfare and their employment and their dignity; these workers ferociously took to the streets to first mourn the workers who were murdered by the ruthless bourgeois system and secondly to vocalise their demands in front of the Ward Office (Local Administrative Body) of the locality where the workers were killed. 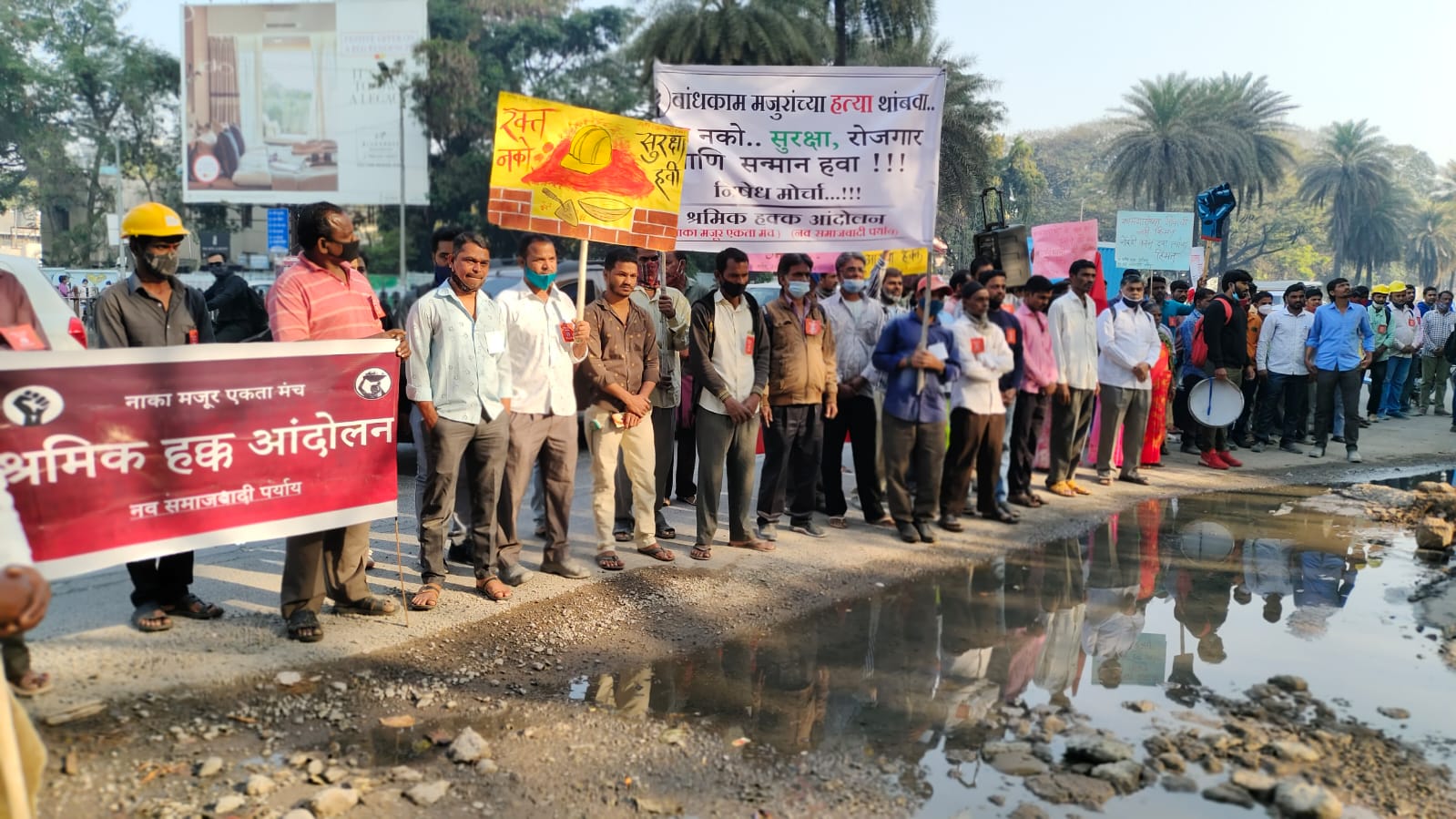 Hundreds of construction workers have died in similar circumstances in the past many years. The vital role of the Pune Municipal Corporation (Local Governing Body) which has been neglected by numerous administrations through the history has once again come into light. The nexus between the governments, local bodies and the bourgeois class is once again exposed. The prior essentials for the safety of the workers are
thoroughly avoided by the administration to increase the profit margins of the Builders. This has been challenged to the core, through Shramik Hakka Andolan. In the demands it can clearly be seen what the workers are aiming for. Transformation or Disruption. Some of the demands are –

1) An independent safety system should be set up for the safety of construction workers to ensure that such incidents do not happen
again. For this, at Pune level, the provision of safety audit in the construction law should be strictly implemented.

2) Ahluwaliya Contractors (India) Limited’s Chief Manger, Main Site Engineer, Site Manager being the prime holders of the
aforementioned Yerawada site incident, they should be booked under IPC for Culpable Homicide. The officers responsible for
inspecting and taking action against the developers of the said site should be charged with culpable homicide as well.

3) The Municipal Commissioner should inquire whether the registration of the workers was ensured before giving permission to this construction site. If such registration had not been done and the
injured, dead workers were not registered, a case should be filed against the head of Labour Welfare Department and Construction Department under Construction labour law.

In India 93% of workforce is in an unorganized sector. They play a significant role in country’s economy. Of this, 48.92% workers i.e. as many as half are employed in building and construction sector. Nonetheless, their working conditions are miserable and there is an acute lack of any social security provisions. This huge unorganized sector has been excluded even from the basic necessities of life. Covid-19 pandemic has made the situation worse. It meant these workers had to face repetitive lockdowns and subsequent loss of livelihood.

Our engagement with workers started in November 2020 when nationwide general strike was declared against anti-labour laws. In our initial interactions we explained the overall anti-labour orientation of our system in general and this government in specific. We emphasized the need to organize and fight for better working conditions. We appealed them to join the protest on 26th Nov in solidarity with general strike called by trade unions across India. This received an encouraging response which further enthused us to seriously pursue the efforts to organize them.  We started the process by regularly visiting Naka (place where these daily wage labourers assemble each day in search of work) and discussing with them individually or in groups the need to organize.

When Maharashtra government announced the lockdown yet again in April 2021, workers were pushed to an edge. The living conditions had already worsened due to previous lockdowns. Not longer able to afford further loss of livelihood, workers continued to visit naka in search of work. But lockdown meant they struggled to get the work; not to mention the occasional harrasement by police for defying lockdown. As a relief measure, the government had announced aid of 1500/- for construction workers registered with ‘Building and other construction workers’ welfare board (BOCW). However most of these daily wage laborers were not registered with BOCW. They were not issued a certificate (that certified they were construction workers) by PMC (Pune municipal corporation]. Our investigations revealed that PMC has not bothered to reach out to the workers and work out procedure, deploy resources to verify their credentials and issue them certificates. Even workers employed by PMC on contract for its own construction works too didn’t receive certificate. Such a callous and insouciant attitude of PMC meant thousands of construction workers were deprived of any social security provisions provided by BOCW.

Since then (April 2021) we actively engaged with the workers. Workers were infuriated when they were explained how administrative lapses has deprived them of basic social security provisions. In a bid to take our engagement further, we began to visit bastis (settlements) where they lived in the evening. We conducted meetings there and also had discussions with them individually at their houses impressing upon them the need to be organize. We reached out to around 200 workers. To take this participation further, in May we decided to found Naka Majur Ekta Manch as an informal body and enrolled workers as its members.

Meanwhile, we corresponded with PMC, held meetings with officers but to no avail. Subsequetly, we decided to call for the protest after consulting with workers. We reached out to other unions and organized the protest on 9th July against PMC.  This received an encouraging response and as many as 70 workers turned out. Participating in the protest meant a loss of a day’s livelihood but still they were determined to fight for their rights. Those who turned up included 14 women and good number of young workers. Shouting slogans asserting their rights, singing revolutionary songs or the experience of the struggle had a remarkable impact on workers. It raised their consciousness and made them realise the importance of struggle.

We intend to take this engagement further. Considering their abysmal living conditions, politicising these workers has its own challenges. Nonetheless we are resolute to work for their right to registration on one hand and continue with our engagement to politicise them.