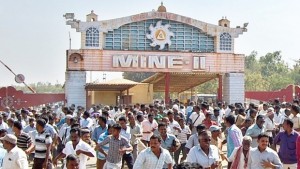 Rajkumar was working in mine I of NLC and he went to meet his friend who were working in Mine II. The security personnel did not allow him inside citing that he did not have the required permissions. Arguments broke out between the two and the security personnel put a bullet on Rajkumar’s head and opened 3 rounds of fire. His skull shattered and death was instantaneous. He is survived by his wife and 3 children.

If CSIF constable actually perceived him as a threat to security, he could have easily overpowered him using non-lethal methods. What was the necessity to shoot someone in the head when no life threatening physical confrontation was involved? If this is what an ordinary citizen is made to go through in a state with supposedly no draconian laws, one can only imagine what is the situation in states where laws like AFSPA are in place.

Stones were thrown by both sides following which the protesters were lathi charged and tear gases were used to disperse the crowd. The enraged CSIF personnel damaged the vehicles belonging to the workers.

The protesters and the family of Rajkumar also launched a dharna and refused to give away the body before any action was taken. Removal of CSIF from the NLC campus was also another demand of the protesters. But the police have forcefully removed the body from the premise. The CSIF personnel was later arrested and produced before the local magistrate.

Many workers including trade union leaders were injured in during the protest and they were admitted in the NLC general hospital. Leaders of many political parties have condemned this incident. Joint Action Council of all the Trade unions that represent the permanent and contract wokers have gone on a token strike on Tuesday.

1. Monetary Compensation to the Family of Rajkumar.
2. Guarantee a permanent job to one of the member of RajKumar’s family.
3. Abolition of contract system in NLC.
4. Compensation to those workers whose vehicles were damaged.
5. Strict regulation on use of lethal weapons by the CSIF in the premises.
6. Allocate guards who can understand the language of the locals.
7. Speedy and open investigation of the whole incident, and alleged similar incidents in the past involving the unions.

It is imperative on the leadership of the Unions to have an industry/trade wide unions on a town, City, state and national basis strictly run on grass roots democracy, which will be enormously effective in fighting for better wages and conditions from the current fractured unions under the control of political parties, NGO’s etc.