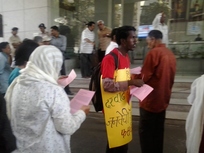 In the 48 hour General Strike called Joint Committee of Trade Unions (JCTU) called by the 11 Central trade unions, New Socialist Alternative (CWI-India) intervened with leaflets in Bangalore and Pune. The following are the reports of our intervention in these respective branches.

11 trade unions in the country had called for 2 days of general strike on 20th and 21st Feb. New Socialist Alternative – Pune extended its full support by participating at public rally help by united forum on 20th Feb. We endeavoured to reach out to the working people with our ideas. We had put up a poster exhibition on gas and diesel hike at the rally. Through leaflets and poster exhibition we had dialogue with workers assembled and exchanging our views. This was first such intervention at a general strike by the Pune branch and the response was good.

On the eve of the strike Sharad Rao of HMS{{1}} had called off participation of unions controlled by him. His association with NCP{{2}} is too well known and this last minute ditching meant transport unions that were crucial to success of the strike stayed away from it. In Pune too city buses were running and auto rickshaws stayed off the road for only four hours offering token support. This rendered the strike in the state less effective. Even few of the industrial unions like Tata Motors too withdrew their support at the last minute.

On this backdrop a rally was led by Bank and government employees’ unions who observed 100% strike and enthusiastically participated in the rally. Incidentally private sector banks except ICICI too participated in the strike. 350 odd Employees of these unions assembled at Lokmangal and shouted slogans against anti-labour policies of Congress led UPA government – targeting Prime Minister and Finance Minister in particular. Another rally held at Pimpri-Chinchwad experienced similar turnout. Manufacturing and processing units at industrial belts around Pune city (Chakan, Bhosari, Talegaon etc) saw labor unions gathering at various points and sloganeering against government policies.

On the 2nd day, we participated in a rally organized by various trade unions from the Labour Office to Collector’s office which involved participation of over 1000 workers from various manufacturing units. Like in the previous day, we had an poster exhibition on display at both these places which attracted a lot of people and gave us a chance to interact with many workers. We also gained first hand experience on the kind of exploitation faced by these workers and many workers openly invited us to visit their factory and set up similar poster exhibitions.

All the members of the branch along with sympathizers were on the street leafleting and speaking to workers. Workers in general were agitated at the wholesale privatization being carried out by the government. Also certain sections of workers expressed their anguish at the betrayal of certain trade union leadership. This exposure to working class was critical and members of the branch gained confidence in campaigning amongst the working class.

In Bangalore, the New Socialist Alternative intervened in the general strike with leaflets that were distributed all over the city. We brought out the 5000 leaflets in two languages – English (2000) and Kannada (3000). We participated in workers rallies in industries belts of Bangalore and also rallies organized by Central Trade Unions at the City center. Apart from that we distributed leaflets at key areas in and around the city.

As the strike only evoked partial response in the city, workers participation in general strike was comparatively less compared to other regions of India. Nevertheless, workers from various industrial units ranging ranging PSU’s, private industries like the garments, key manufacturing units and unorganised sector workers participated in the strike. Banking sector was also affected by the strike. Public transport in Bangalore was only partially affected owing to arm twisting tactics of the BMTC management that forced many workers not to participate in the strike.