Earlier this month the United Forum of Bank Unions (UFBU), an umbrella body of nine bank workers unions has announced a mass petition campaign to draw the attention of the parliament and the government to the present detrimental policies on the banking sector.

The bank workers unions have also outlined their demands in the mass petition which opposes the banking reforms and their agenda for privatisation, demands to withdraw the proposed Financial Resolution and Deposit Insurance (FRDI) bill, and to safeguard the depositors’ money, demands to take the stringent action on the willful corporate loan defaulters, and not to pass on this burden on the shoulders of the ordinary people etc. These bank workers demands also support the cause of the farmers, ordinary bank consumers and the cooperative banks.

We campaigned to rally the support of the people towards these demands to formulate pro-people banking policies. And for the last few days our comrades got signatures in support of the petition. There was an overwhelming support from all sections of the people for these campaign demands. This clearly indicates the importance of resisting and opposing the present policies of the banking sectors and to take immediate measures to address the problems of the ordinary people.

While we patiently explained the demands of the bank workers, and the need to support this campaign, we also discussed the importance of working class lead struggles and socialist alternative to the present crisis ridden establishment politics.

We submitted those signatures to the Tamil Nadu Bank Employees’ Federation (TNBEF) affiliated to the All India Bank Employees Association (AIEBA). The signature collection will be completed by January 31. So we will carry on collecting signatures for this mass petition till the deadline and will contribute our efforts to mobilise the bank workers unions initiative to obtain 1 crore signatures.

In the August 22nd all India bank workers strike was called by UFBU and we have seen the impact of the bank workers strike with major participation particularly from the young workers. Though a petition to be tabled in the parliament may definitely not have that same impact of a coordinated industrial action in challenging the government, the mass signature campaign is nevertheless an important initiative in the recent times by one of the organised and key industrial working class sections to rally the support of the public.

We should all be a part of this campaign initiated by the bank workers to resist the ‘anti-people policies’ of the government in the banking sector and try to build up networks with the local trade unions, left-wing organisations, community organisers and activists. And in this process it is also equally important to further galvanise the campaign for socialist and radical demands such as jobs for all, decent livable wage of Rs. 25,000 per month, re-nationalisation of all privatised industries and services under workers’ control and management, etc. 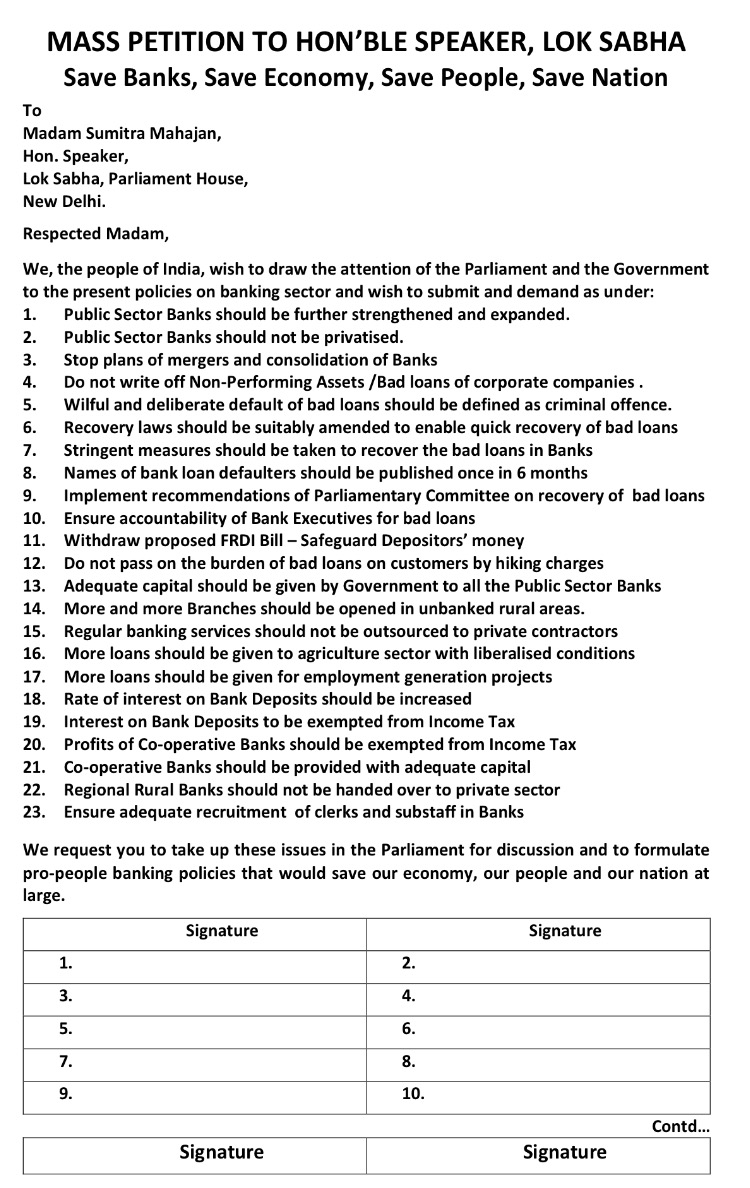