The Tamil Nadu State Transport Corporation Limited (TNSTC) workers strike managed to disrupt the day to day affairs of the entire state. With more than a lakh workers involved, in a very crucial sector provisioning to over 2 crore people every day, the already unpopular ADMK state administration was in a state of crisis!

The bus workers’ strike which lasted for 8 days was called-off on 11th January night by the trade unions. Strike began on 4th January after the trade unions which represented the majority of workers called for an indefinite strike after their demands particularly the wage revision (the workers demanded an increase of 2.57% wage increase while the govt was stubborn at 2.40%) and the release of pensioners’ dues were not agreed by the government side even after many rounds of talks with the worker’s representatives. The govt refused further increase in the wage revisions and closed the negotiations.

The strike soon saw the participation of more than 90 percent workers and the govt wasn’t even able to run a minimum skeletal service with its own union members. A large sections of the union members of the ruling party (ADMK) – Anna Thozhilalar Peravai (ATP) supported the strike.

The union’s particularly the Labour Progressive Federation – LPF (affiliated to DMK) and the CPI(M)’s CITU played a very important role not only in organising the strikes but in also countering the legal procedures initiated by the state in the courts. Of course the unions were also pressurised by the agitated workers who last December reacted strongly against the union leadership when they called off the strike citing RK Nagar elections.

Very soon with the fuming mass discontent over the govt for the lack of bus transportation (the lifeline for the day to day economic activities of the city), and the general support and empathy among the public for the workers’ demands, and the growing militancy among the workers with rallies every other day with huge turnouts etc., the govt had no choice. It had to quickly settle Rs. 750 crores towards its dues (of almost Rs. 7000 crores) appropriated from the worker’s pensions funds, accept a pay increase of 2.44%, and appeased the trade unions for further negotiations (for the workers demands of 2.57%) to be mediated by the retired judge Padmanabhan.

This is again an important event in the contemporary politics of TN – where workers forced the govt towards negotiations, whereas only last November the nurses strike was restrained by the Madras high court. This bus workers strike showed the combative potential of the organised working class and can be used to strengthen the debate on the importance of industrial action and also the importance of unionizing unorganised sectors workers.

However for working class led struggles, it’s still a convoluted long road, and the class politics in its leadership level is ridden with a lot of sectarian complexities. The mainstream media and political parties are cautious over the increasing militancy amongst the working class layers as the strikes and industrial actions are cropping up everywhere. And the establishment parties of all shades with their own trade union networks maintains a hold in the labour movement and thus steering sections of the working class to serve their own means. At the same time the workers in the organised sectors are yet to orient their struggle on radical political lines and largely remains outside the popular political upsurge that’s been erupting quite often in the recent period. This obviously shows the bankruptcy of the leadership of the main communist parties and their opportunistic electoral alliances with those corrupt, and rotten establishment parties.

We need to understand the significance of this resistance of the bus workers particularly in these objective circumstances and this would in the coming days boost the confidence of the activists to pursue the support of the working class in their various struggles against this oppressive system. We need to find more avenues to demand the active intervention of the working class in the upcoming struggles. And most importantly there is a definite need for extensive campaigning to politicise the workers. 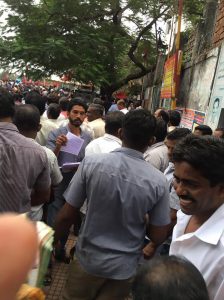 Our branch comrades in Tamil Nadu intervened in this strike effectively, with the help of our contacts who are themselves unionised bus workers involved in the strike. We campaigned in support of the bus workers strike and supported the demands of the workers. We also appealed the general public to support the strike. Our comrades and contacts gave out thousands of leaflets among the bus workers and the public, put up posters around the important bus depots and carried out an extensive social media campaigning as well.