Millions and millions of people in Tamil Nadu are heavy heartedly grieving over the death of the young student Anitha. There is a general feeling of an unbearable loss particularly amongst those who supported Anitha’s fight against the system over the NEET exams! Many lost a sister, a daughter, a family member with Anitha’s tragic death. Spontaneous protests are erupting everywhere regardless of very high police alert show the outrage amongst the people in general. Students, activists and young workers are all in a combat mood against the system right now. read more

The political trend in many countries across the globe has seen a surge in right wing policies being championed by bigoted leaders under facades of romanticising the past, and false promises vowing to bring back the mythological ‘glorious days’. This trend can be seen across the globe be it the US or India. The so called leaders propagate twisted versions of history and use the mass media at their disposal to promote the same. In their pathetic attempt to glorify the past, these leaders have declared a silent war on the scientific community of the world. The developments that took place through tedious research and the lessons formulated from studying the previous blunders are belittled. read more

Murder by “Suicide”
Institutional Murder of a Dalit Research Scholar

The India wide protests that have erupted following the “circumstances” orchestrated by the RSS/BJP right wing which lead to the forced death (SUICIDE) of Rohith Vemula. Rohith a Research Scholar coming from the Dalit SC community was pursuing his doctoral studies at the Hyderabad Central University (HCU). His murder by suicide has once again brought to the surface the ugly face of India’s caste ridden hierarchical society. To make matters worse, we have a ruling party that is steeped in an ideology of hate against minorities and the oppressed castes (particularly the Dalits), promoting Brahmanical bigotry every step of the way. read more

Indian Science Congress Association was formed in 1914, and holds it’s meet in the first week of January every year. However this year for the first time in its history it held a session on Scientific practices in ancient India, which roughly covers the period from 2000BC to 500AD. The session had talks on Engineering applications of ancient Indian Botany that rather remarkably started with an attack on contemporary medical research by claiming how ancient Indian doctors claimed cancer cells were present in every human body and how today we do not even understand diabetes properly! read more 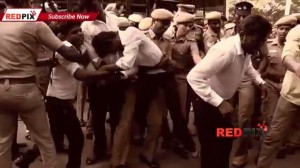 For the past 26 days, over 100 students (including many women) from DD Medical College have been protesting within the campus of Dr. MGR Medical University campus in Chennai. The students have been left in the lurch following the cancellation of the college license by the Medical Council of India (MCI). The students had been admitted on the pretext that the college was affiliated to Dr. MGR Medical university and also had a proper approval from MCI. read more