Aam Aadmi Party (AAP) took the dramatic step of pulling out of government on its own on 14th February. The reason it blamed the Congress and the BJP for not allowing it to table the Jan Lokpal Bill (ombudsman bill) in the Delhi Assembly.

The latter in its defense claimed that AAP was not following the due procedure which required the permission from the Union Home Ministry. This it seemed was unacceptable for the AAP as it went against its other main demand for full statehood to Delhi. AAP even went on to claim that its recent FIR against the Reliance’s Mukesh Ambani and Petroleum Minister Veerappa Moily over gas pricing issue was the sole reason for both the Congress and the BJP for not supporting its Bill.

The real reason, however, was much more calculative on AAP’s part. In fact, AAP wanted to table the Jan Lokpal Bill in a public arena to add up all the spice and drama, which surely would have had a melodramatic climax. As it prepares to go national in the coming general elections, clubbing both the Delhi election and general elections together would definitely have gone in its favour atleast as far as Delhi assembly was concerned. Two, its minority government in Delhi was anyways falling apart with one of its own MLA’s and two other MLA’s (supporting from outside) pulling out. Three, it desperately needed an image makeover after the racist incident involving its Law Minister – Somnath Bharathi. Fourthly, its maneuverability with Congress outside support was limited and the constant threat of Congress pulling out always hanged over its neck. Fifty, it has carried out some of its promises in its manifesto, limited as they may be, but enough to have earned the goodwill of the electorate for the time being.

Now with the Lt. Gov Najeeb Jung (Delhi Governor) recommending President’s rule in Delhi, instead of dissolving the assembly as recommended by the AAP govt., both the Delhi elections and general elections may or may not be clubbed together. This again may or may not benefit the AAP since if Delhi elections were to be conducted after the general elections (which is what both the Congress and BJP wants), AAP’s performance in the General Elections will definitely have a bearing on the Delhi assembly elections. AAP has challenged Jung’s decision in the Supreme Court.

Arvind Kejriwal’s threat that he would resign a “thousand times” over his pet legislation – Jan Lokpal Bill, while it might work this time around, such a do or die attitude will surely backfire in the long term. AAP could have tried several options open before it, for instance it could have followed the due process as it had done in some of the previous bills or atleast tried negotiating its way through or hit the streets to bring pressure on the Central government. But no, AAP’s wanted it to happen this way. It wanted itself freed from any obligation of running the Delhi government, so that it can concentrate nationally given that general elections is just few months away.

It also knows very well that Congress is perhaps at its lowest point electorally speaking. Nor is the BJP very happy of facing elections in Delhi especially around the issue of corruption. And AAP now has the corruption bandwagon to fall back upon to reap rich electoral dividend. Added to this now is superstar status of taking on some of the biggest corporate companies such as Reliance and Tata on gas pricing and power tariff.

For all the hue and cry, it is worth recalling that AAP’s Jan Lokpal Bill can hardly be described as a democratic legislation (more of a surveillance state) and can at best be described as a managerial solution to the large scale corruption in the country. As we have maintained in our previous articles, this piece of legislation cannot address the true cause of corruption nor even fight AAP’s new found enemy – crony capitalism.

While AAP is no anti- capitalist party, it has spoken out against corporate companies colluding with governments for lucrative deals and wants complete transparency in business deals. AAP is living in a fairy tale world if it expects capitalism to be detached from the state machinery. Moreover AAP’s problem with Reliance is merely on the gas price, but not on who should actually own KG Gas basin or the question of nationalizing it under the democratic control of the working people. 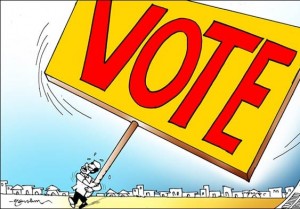 With the elections just 2-3 months away and upto one crore membership claim, AAP is gearing up to contest about 350 seats to the Lok Sabha (Lower House of Indian Parliament) from across mainland India. With its first list of 20 candidates that was just announced, they prominently include activists from social/ political movements – Medha Patkar who will be contesting from Mumbai, Lingaraj Bargah – a people’s movement activist from Odisha, Yogendra Yadav – the now prominent AAP leader and a Lohiate Socialist, and few others from either anti-corruption or Lohiate backgrounds.

On the corporate side, it includes Meera Sanyal – corporate banker who will be contesting from Mumbai South, Ashutosh – a corporate media journalist who will be taking on Kapil Sibal and Anjali Damania – a real estate developer, with family background in the RSS, who will be taking on former BJP President Nitin Gadkari in Nagpur. AAP is also in negotiations with anti- nuclear movement – PMANE in Tamil Nadu and also in touch with Chattisgarh Tribal activist – Soni Sori who was jailed and tortured on fabricated charges. They even offered a ticket to the well known anti- AFSPA campaigner – Irom Chanu Sharmila, who has declined the offer.

Regardless of the potential instability of such varied background/ ideologies under one banner, AAP is definitely going to put up a tough challenge to the mainstream political parties and might even win anywhere between 10 – 50 seats depending on how AAP is able to convert its eclectic mix of anti- corruption, clean governance and little bit of anti- corporate rhetoric into votes in the coming elections. There are also reports that Arvind Kejriwal himself might take on Narendra Modi if he were to run contest outside of Gujarat. Certainly their anti- Modi rhetoric seems to have reached an all-time high, questioning his close relationship with corporate companies such as Adani group, Reliance etc.

As we have maintained in our previous articles, AAP stands to gain only in few of the Northern states adjacent to Delhi and maybe in the urbanized parts of Maharashtra and Karnataka. In the rest of states, it might be able to make a dent in the votes for the mainstream parties especially if it were to field more prominent social/ people movement activists in states like Odisha, Chattisgarh, Jharkhand, Madhya Pradesh, Southern Tamil Nadu (around Kudankulam area) and other regions with strong peoples’ movements.

Despite having gotten away this time around, AAP’s record in government can best be described as high on rhetoric and theatrics that could make it the stuff for soap opera, stumbling from one crises to the next. Its moralistic approach to social/ political issues and managerial solutions to the crises facing India today is not going to solve anything. While blaming everything on mainstream political parties might work the first time, but in the long term it will have face up to the problems for which they have no answer and the contradictions within the party itself.

No other political party in recent times has courted so much controversy in such a short space of time as the AAP has done in the last 49 days of coming to power. Its anarchic style, brazen attitude and political immaturity could hardly qualify it to be model party worth emulating. Its unpredictable swing from right to somewhat center-left with no clear ideology would not make it a trust worthy party for the bourgeoisie. Besides, AAP new frontal attack against what it calls ‘crony capitalism’ is not going to be taken lightly by the capitalist classes and they will unleash their wrath when the time comes.

For now, middle classes appears to be behind AAP. But in the long term, the moment they see AAP as not representing their interests, they too will switch sides. And that leaves the working people, who were the ones who actually voted AAP to power in Delhi. There have been strikes by contract workers in the transport, education etc., to regularize their work and AAP had started the process of regularization, which now remains incomplete as AAP has walked out of government. Beyond few token measures, AAP will not represent their real interest and the working people will come into conflict with the AAP.

The Indian political arena now enters an even more very interesting period leading upto the general elections. While AAP is definitely not an alternative to the multiple crisis facing India, it is inadvertently bringing some of the real issues to the fore and exposing itself as well as the mainstream political parties in the process.