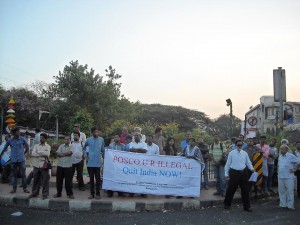 On 15th January, New Socialist Alternative (CWI-India) along with other pro- people organizations protested at Town hall in Bangalore, under the banner of People’s solidarity concerns- Bangalore as part of National Day of Protest against POSCO. POSCO has been involved in forcible land acquisition for the project much before the recent environmental clearances were accorded. It has also been involved in acts to violently suppress the anti-POSCO struggle through every unconstitutional and illegal means, from hiring criminal elements to intimidation and murder of local activists spearheading the movement, exposing the extent to which they are willing to bypass the law to bulldoze their way through.

It is time to fight back with a collective conscience. Projects like POSCO can be seen around the country threatening the environment, the livelihood of working people and creating more victims of eviction. And all of this comes like a sugar coated candy called DEVELOPMENT!