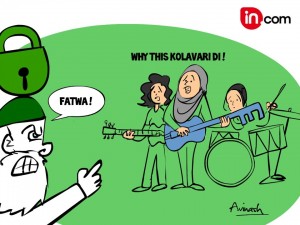 Becoming a rock-star is a dream many students and youth in India have nowadays. But for the three talented girls in Kashmir Valley, the dream will forever remain a dream. In the backdrop of the fatwa on the first Kashmiri all-girls band – Pragaash, which has hit headlines lately, the girls are today scared for their lives. Dukhataarn-e-Millat – a right wing, vigilante women’s outfit – have called for a social boycott of the band forcing all the three girls to go into hiding.

In December 2012, guitarist-vocalist Noma Nazir, drummer Farah Deeba and guitarist Aneeka Khalid, hit limelight with their winning performance at Battle of Bands. Little did the three girls know that recognition would come with death threats. Soon after winning best performance at Battle of Bands, the girls were threatened through hate mails and messages on their mobile phones and social networking. Although police have taken action against some who threatened the band on Facebook, the girls have been left terrified.

The band of course was still together until a ‘fatwa’, a juristic ruling concerning Islamic Laws, was issued by the Grand Mufti, the highest official on religious law in Kashmir and a handy tool of the Indian state. Following the Fatwa, the three girls have been forced to abandon music and have quit the band altogether.

In a breach of Freedom of Expression and artistic freedom, the fatwa has disoriented the girls from continuing their musical career or even speaking up. This is a classic example of the patriarchal system and male domination that is prevalent and encouraged in the rotting capitalist system. Women are oppressed every day at workplaces, school/college, streets and where not? Instances of oppression in their very own homes are not scarce. The famous Delhi rape case, the tragic case of Savitha Hallappanavar in Ireland (who was not allowed to abort her fetus although it posed danger to her life) are all classic examples of how inequality prevails in the system, making men more dominant in the society.

The Indian state of Kashmir with its bloody recent history have only made life all the more difficult for most ordinary Kashmiris. The draconian Armed Forces Special Powers Act has put the people of the state under the gun barrels of the Indian Army, subjecting their everyday life to be decided by the military. Cases of the army taking advantage of women, physically, have been of regular occurrence.

In a state like this, the three girls broke barriers for the first time and came out to perform rock music. But for the grand mufti and the religious conservatives, this action of theirs challenged their religious authority and had to be put down by a religious dictum going to the ridiculous extent of claiming that music is un-islamic. “When girls and young women stray from the rightful path… this kind of non-serious activity can become the first step towards our destruction,” Grand Mufti Bashir-ud-din Ahmad quoted.

The fatwa has been instrumental in stopping the girls from performing. This deed is nothing but an attempt to restrain the freedom of expression of the three gifted musicians and suppression of women’s rights. If this ruling in the name of religion is not called oppression, then what is?

Kashmir is known for Sufi music and is a home for some musical greats such as late Ghulam Hassan Sofi, Ghulam Mohammad Saznawaz and Ghulam Nabi Sheikh. These artists have played as messengers of Kashmiri music to the world. Would Sufi music be as popular as it is today if fatwa were issued against them? How is women performing different from men performing? Is this not a violation of right to equality in this supposedly secular, democratic country?

Kashmir is the only Muslim-majorty state in India. The societal and social role of women is dictated by religious laws and is most often used to suppress women further more in an already oppressed region. The girls have the right to sing and express themselves freely without fear. While rock music may not be according to everyone’s taste, but neither the mufti nor anyone else have any right to dictate to the people of Kashmir on what is right and wrong.

These obscurantist diktats even in this modern 21st century is despicable and must be condemned. While religious beliefs can be the choices of people in their private lives, but cannot and must not hold the vice grip of the state machinery and polices that affect the people.

And as of ‘Pragaash’, which literally means ‘First sight of light’ seems to have gone into darkness forever.