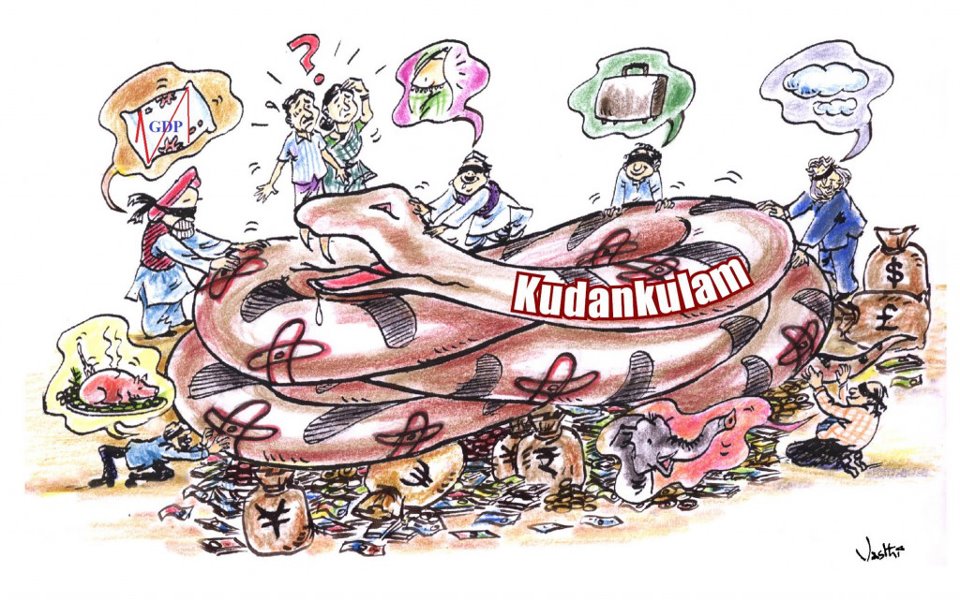 We refuse to learn!

The following article is written by Arun Kaliraja B an activist of the May 17th Movement and also a close supporter of the New Socialist Alternative (CWI – India). It is based around the current nuclear debate in India in relation to the most controversial Koodankulam Nuclear Power project.

The nuclear sycophants, as usual, are trying to hide behind the façade of the alleged “safe nuclear history” of India or India’s indigenous technology or paraphrasing the ‘development’ mantra. But none of them, like the Ostrich’s head stuck in the sand, ever acknowledge the true hazardous nature of this destructive technology, the profit motive of corporations behind it and the facts shrouded behind the wall of secrecy of the Indian military-industrial complex.

As this article has rightly pointed out the only solution to this crisis is a genuine socialist alternative under democratic control and a sustainable mode of development that can truly show a way forward to the present hawkish propaganda of the capitalist class who make us believe that TINA to Nuclear self-destruction.

India’s Nuclear Discourse : You Perish, We will Progress

When Japan was struggling to contain the nuclear meltdown in Fukushima, the climate talks started in June 2011 in Bonn, Germany. On 14th June India tabled its proposal to include ‘nuclear power’ under the green technology when there is a major shift in the global opinion against nuclear power. This earned India the ‘fossil of the day’ award, the award that is given by Climate Action Network to the nations that make anti-green proposal. This proposal reflects the outlook of the Indian establishment, which is cut-off from reality and wants to pursue the most brazen anti-people policies while claiming to be the world’s most populous democracy

It is this outlook that has now been thrust on the people of Koodankulam, Jaitapur and elsewhere in India. With countries like Germany, Switzerland and Italy opting out of the nuclear power and China investing in solar power in a huge way, while India’s ruling classes on the other hand are hell bent upon on their way to expand on the nuclear energy front.

Dr. Manmohan singh, in his address on the 25th Anniversary of the Bhopal gas tragedy said “The enormity of that tragedy of neglect still gnaws at out collective conscience” It is 27 years since the accident in Bhopal, but the people there still do not have access to safe drinking waters, access to quality health care and are yet to receive their compensation. And now India is on its march to stage the next ‘tragedy of neglect’.

The Koodankulam Nuclear power plant (KNPP) has its roots in the 1974 Pokran test. The US stopped fuel shipments to the Tarapur nuclear power plant after the test, and following this India came under the influence of Soviet nuclear establishment. The nuclear deal was first discussed in 1979 and finally in 1988 Mikhail Gorbachev and Rajiv Gandhi singed the KNPP deal.

The three districts which will be affected by the Koodankulam plant accounts for 70 % of Tamil Nadu’s fish catch. On May 1989, National Fish Workers Union assembled to protest against the plant. Around 10,000 people participated in the protest. Police opened fire during the protest and one person was killed in the shooting.

After the disintegration of Soviet Union the project was stalled. In March 1997, H D Deve Gowda (the then Indian PM) and Boris Yelstin signed a supplement to the 1988 agreement. India ignored the safety concerns over the VVER reactors and went ahead with the Koodankulam nuclear power plant and went ahead for strategic reasons that also included billions of dollars worth arms deal with Russia.

The Nuclear power Corporation of India Limited (NPCIL) acquired 929 hectares of land for project and 150 hectares for township. Promises for better livelihood, jobs and higher standards of living were made. As usual these were empty promises and the people of Koodankulam started to oppose the project once again under the banner People’s Movements Against Nuclear Energy (PMANE) in 2001 which continues to this day. Abdul Kalam (nuclear scientist and fr. Indian President) on his latest visit on Koodankulam plant tried to lure the people with the same promises, which this time found no takers.

Public hearings were setup thrice and all of them ended abruptly without addressing any of the concerns of the people. Over the last months thousands of people have joined the protest with 127 of them going on a indefinite hunger strike.

The current Tamil Nadu (TN) state government headed by J. Jayalalitha has passed a resolution to halt the power plant until the centre allays the fears of the people. Instead of the protest fizzling out, the protesters are standing even more firmer on their demand to – Shut down the nuclear power plant.

The Centre which has no credible answers to the peoples concerns, has tried to discredit the struggle as being funded by foreign agents, Christian missionaries. On World Fisheries day, for instance, nearly 1000 fishermen from village of Idindhangarai sailed into the sea with black flags and demanded the permanent shut-down of the nuclear power plant. The police registered cases under sections 121, 153(A),143,124(A),447 of IPC. The sections 121 of IPC reads as follows “Waging, or attempting to wage war, or abetting waging of war, against the Government of India”. Yes its war!! The war has now expanded from the tribal belt to the shores!

The pro-nuclear group boasts of the safe history of nuclear projects in India. No nuclear reactor is safe! The nuclear reactor is highly complex system and even a small mishap in one of its subsystem results in a complete breakdown. And further not all accidents occur in the same pattern. And the safety mechanism will fail for one or the other. For example the Fukishima nuclear power plant had many in-built safety features in place to prevent a nuclear meltdown. But they simply failed in the aftermath of the earthquake.

Further a Norwegian group disclosed a report presented by the nuclear safety experts from Russia to President Dmitry Medvedev on the country’s nuclear reactors. The reports revealed that the reactors cannot handle both man-made and natural disasters. The Russian reactors were marked with 31 fatal flaws. This holds well for the VVER type reactors that are installed in Koodalkulam. Even after such reports, Abdul Kalam, the nuclear fanatic, baptized the reactors as 100% safe!

“Nuclear safe history” of India is a lie that is propagated by the pro nuclear groups. Nuclear history of India is filled will maladministration, neglect and secrecy of the government and the suffering of the people living near the reactors. The Atomic Energy Act of 1962 does not allow information to be shared about matters regarding nuclear energy. The bill was tabled by Jawaharlal Nehru (the then Indian PM) and there was a huge opposition to the secrecy that the bill guaranteed. When Krishnamurthy Rao (an MP and an opponent of the bill) asked Nehru “Does the proposed bill cover the peaceful (nuclear) purposes?” And Nehru replied, “I do not know how to distinguish the two (peaceful and defence purposes).”. The question lingers till date and so is the secrecy!

An article in Outlook (28 July, 2003) exposed the accident that happened in Kalpakam nuclear power plant. On January 21,2003 six workers of the Kalpakkam nuclear power plant were exposed to high doses of radiation. B.Battacharjee, director of BARC called it the worst accident of radiation exposure in the history of nuclear India. This should not be considered in isolation but rather an attempt to hide other radiation exposures that people have been exposed to.

Dr. Pugazhendhi of Doctors Of Safe Environment (DOSE) did various surveys, in the areas surrounding the Kalpakkam nuclear power plant.

A report published in 2003 showed that the workers of Kalpakkam plant and their families suffer from Mutiple Myeloma, a type of cancer that affects the Bones. An RTI Filed demanding the information regarding the total number of people who are affected by the disease did not get any response from the administration. The death rate in the area is four times the normal.

After 2004 that radiations along the coast of Kalpakkam have increased.

In the 16 km around Kalpakkam, 12 cases of polydactyly, the growth of additional finger in the hands or feet of new born were found among the children aged 1 to 15. Polydactyly and malformations are usually associated with the exposure of foetus to radiation.

The situation in Jadugoda, a tribal village in Jharkand where uranium is being mined by Uranium Corporation Of India Limited (UCIL) from 1967 is still worse. In 2007 the Indian Doctors for Peace and Development conducted a health survey within 2.5 Kms of the mines. It found that 9.5 % of the new borns die each year due to extreme physical deformations. Primary sterility has also been found alarmingly common in the region. In December 1998, Bihar legislative council sent its environmental committee, with a medical team to Jadugoda. The committees report blamed the UCIL operations for the local ill health. “Buddha weeps in Jadugoda” a documentary film (1999) highlighted the alarming incidence of congenital defects in the region.

A Tehelka article (September 25,2010) exposed the level of adherence of the nuclear establishment to the safety norms. The workers are not even provided proper helmets and breathing masks. No warning about radiations, no barbed wire and no demarcation of territory were found. The radioactive waste water released from mines joins the stream flowing through the village where children were found bathing and women washing clothes. The trucks carrying uranium ore were loosely covered and radioactive dust was flying in the wind.

The Open ponds store leftover uranium tailings that contain radioactive materials. These ponds contaminate the ground water. During the rainy season these radioactive waters flow into the rice fields and enter the food chain. 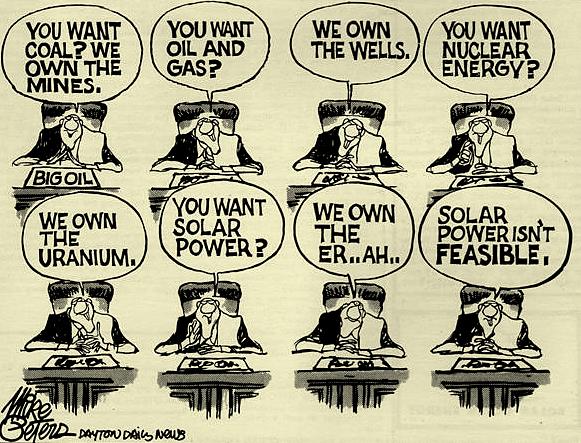 Even after all the environmental hazards associated with nuclear plants, one question still lingers in the people’s mind – What is the solution to the current power crises facing India? Don’t we need electricity?

Energy efficient technology, minimizing the energy loss during transmission, switch over to renewable sources of energy certainly have the potential to reducing the energy crisis. But can the energy crisis be solved under the capitalist framework? Or can capitalism solve any question related to the environment? Establishing a nuclear power plant in the name of development is nothing but trying to paraphrasing evade the antagonism of a system based on capitalism.

The environmental degradation is much greater than ever before because of the anarchic production that characterize capitalism. This anarchy will only lead to over production of commodities and hence wastage of energy. The system is driven by individuals pursing their own interests and nation-states will only fight more and more among each other for resources. The world will see more and more invasions to grab the limited and polluting oil resources but not a progressive development on the renewable energy front.

Any attempt to create a system with sustainable development and efficient energy usage will essentially have to be anti-capitalist in nature i.e., a socialist alternative. As Robert Newman (British Comedian & activist) puts it forward “It’s capitalism or a habitable planet – you can’t have both”.