New Socialist Alternative strongly condemns the attack on anti CAA protesters. We must come forward to oppose the fascistic Hindu fanatics with RSS background carrying out this organised attack on protesters and poor people. They use the Trump visit and the receding movement to come to the street to reveal their true violent face.

The left-wing Trade Union organisations and genuine independent left forces must initiate steps to set up defence Committees under the democratic control and direction of working-class and the other oppressed. It is needless to say that under the present horrific circumstances following the pogroms in Delhi where all communities have faced death, injuries and loss, the police and the state machinery has lost all the credibility to maintain law & order. All the liberal leaders and so-called defenders of the people stand exposed at this juncture mainly falling behind Modi’s call to maintain “peace”. CAA protesters have nothing to do with this violence. It was an organised attack by the Hindu far-right. You can’t ask the victims to stand defenceless praying for peace while facing death and destructions. Neighbourhood committees must be organised to defend ourselves.

Lull in the protest movement does not mean a defeat.

Since the announcement of the enactment of the CAA Act, fight against it has erupted in many parts of India. The protest movement intensity had gone down recently. One of the reasons for that is that most of the activists are exhausted as a result of a lack of proper political planning and leadership.

But in general, there is a growing awareness of the struggle and the CAA-related dialogue. Many who carried the national flag and registered opposition to CAA believed that their democratic demand will be listened to. But the Indian state doesn’t act in the interest of the workers and those who demand more their democratic rights. The government that carry out the exploitation of the people on behalf of the capitalist is not going to put the welfare of the people as a priority in its agenda.

This is also why we argue that the struggle of the people must adopt a proper political strategy.

Anti CAA protest varied from place to place determined by various factors such as the strength of the left parties, strength of ruling BJP etc. But it was a national protest and participated by many sections of society. The BJP government has resorted to many tactics to suppress this agitation across India and in some states the government has resorted to the violence. In some states, the government denied the people their right to protest. In Tamil Nadu however, the state violence was low in comparison. However, even in Tamil Nadu, in Vannarpet (place in Chennai), the government feared the uprising of the people and resorted to violently apprehending the protestors. People have united in a series of agitations against this blatant misuse of the police force. In Delhi, the central government is trying to bring the police under its control and suppress the struggle. Now they are tolerating brutal attack of the Hindu fanatic goons on the protesters.

Within hours of the announcement of the CAA, people took to the streets and opposed CAA independent of any other right-wing political parties. Those who have quietly returned home today will definitely come back to the streets tomorrow – possibly with even better political insight. The fight against CAA and economic problems are currently dull, but it is not over. It is true that it will arise far huge as conditions continued to deteriorate for the masses.

The struggle must go forward

We need to think about taking this struggle to the next level. The struggle of the students and young people in isolation will only strengthen the state. Instead, we must take steps to unite & organize our strength. The various struggles going on in India must unite. The fight for women’s rights – the fight against caste oppression – is also a fight against the repressive Indian government. All struggles are interconnected. Our common enemy is the capitalist system and the state that sustains it. The unification of these struggles on a class basis will shake up the state. We know that the last general strike action was a major blow to the state. Such a strike action shouldn’t be narrow with a few economic demands but should come together to unite all resistance. Students and youth must join with the workers’ struggle.

The introduction of the CAA and the attack on bank worker rights are intertwined. Hindu fundamentalist government wanted to carry out the attack on our economic conditions and whip up divisions in the society to cover up those attacks. By Pitting us against each other they have imposed their profit-making economic and undemocratic measures on us. We need to build a united opposition rather than individual fights. The strike action is a direct attack on the power of the state. We must take up this as a key fighting strategy. All protest demands must be interlinked with strike action. Our struggle is also the struggle of the bank workers with which the anti-CAA struggle must be interwoven.

To achieve this we must assemble such a far-sighted organization. People cannot stand in the street constantly. The Government of India is not a government that cares about human rights and struggling people. If we are to establish our own strength we must build a mass organisation that represent our interests.

Left-wing parties and trade unions can rally to this task. But their leadership does not make an effort to mobilize their strength. The emergence of a democratically organized mass organization with a left-wing policy that prioritizes the interests of the people will undermine the strength of the capitalist state. This will open the way for the creation of a socialist society that can plan the wealth for the benefit of all. We urge all activists of the Left parties and trade union activists to come forward to build such a revolutionary mass organisation. Let us unite to build our strength.
Suresh Perarivalan
Translated by Naveen Angamuthu
(This article was originally written in Tamil for akhilam.org) 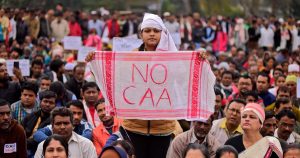