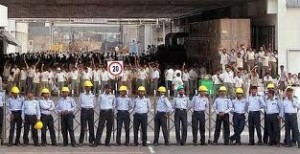 The 13 day strike of over 2000 workers in the Maruti Suzuki India’s (MSI) Manesar plant in Gurgoan (Haryana), close to the national capital Delhi, in the first weeks of June is an important sign of ascendancy of the working class militancy in the region. This strike comes in the wake of the victory of the Gorakhpur Yarn workers (Uttar Pradesh) and a partial victory of the Air India pilots earlier. While the result of the Maruti workers strike cannot really be termed a victory for the workers as the media, management, government and (most disgustingly by the) central trade unions proclaim, it nevertheless comes at an important juncture of high price rises and a not so bright economic outlook for the country.

The Haryana govt. true to its character played the role of a big bully & reiterated its total commitment to neo liberal reforms by going to the extent of banning the strike and placing the labour department completely at the disposal of the company. An even treacherous role was later played by the central trade unions in brokering a deal with the management, government and the striking workers by forcing the workers to end the strike by agreeing to reinstate the sacked workers & some sort of commitment by the management to show leniency in disciplining the striking workers! In return, the management extracted its own sweet revenge in the end by forcing the workers to drop the idea of a new union.

Since when, one might ask, has the managements of multinational companies acquired such powers as disciplining striking workers or the state governments in banning strikes? While the company has violated every labour law in the country by forcing the workers to work under enormous pressures, little leisure, long working hours (9 – 12hrs) & low pay (Rs. 6000 to contract workers & Rs. 17,000 in case of permanent workers), no mention was ever made by any government official or central union leaders in discipling the company in the first place! While the company crossed the 1 million per annum sales mark last fiscal and an increase in profit by 19.5%, no facts or figures is needed to demonstrate that this has come from the sweat and blood fo the working class.

“Win-win” is how Gurudas Dasgupta (AITUC leader & CPI MP) described the deal brokered by them on behalf of the workers. The statement of New Trade Union Initiative (NTUI) read : “A victory for the Maruti Suzuki Workers”. Having literally played no role in either trying to unionize the workers and as usual stepping in the last minute to broker a deal, what the central trade union collectively feared most was a united strike action by the workers of Gurgaon against the exploitation of the multinationals & thereby losing their control of the situation altogether.

If anything, the working class of Gurgaon had no such qualms. The 13 day strike was supported by 60 unions in the automobile sector & workers from another 60 factories that have no unions, helping them by supplying food to the starving workers & one day solidarity support outside the Maruti plant. Fresh into the arena of struggle, the strike showed every signs of spreading throughout Gurgoan & beyond.

The current situation at the Manesar plant is far from resolved. On 11 July, Times of India reported of workers boycotting the elections to the management controlled union and workers attempt to register their own union despite dire warnings from management not to do so. This is a far cry from the “win-win” formula of the central trade unions such as AITUC.

Gurgoan with over 2 million workers (90% on contractual basis) employed in hundreds of units, 1 million in automobiles alone, all of which share all the unique characteristic of neo colonial countries, namely dismal working conditions, a ruthless management & low wages. While relatively new in the arena of struggles but not shackled by ghosts from the past, it nevertheless boasts impressive struggles in the last 10 years such as the 3 month long strike in 2000 at another Maruti Suzuki unit in Gurgoan (which was brutally crushed by management in cohots with the govt.), the victorious Honda workers strike in 2005 and the 50 day Rico Auto strike (2009). While Gurgaon is a fertile ground for future working class struggles in the country, the one missing element is the absence of a genuine working class organization that will guide the workers in not only overcoming the brutal exploitation of the multinational corporations but also in paving way for a democratic socialist alternative.