Farmers Protest the Ruination of their Lives

‘New Socialist Alternative’ supports and actively participates in the nationwide farmers’ protest called today on 25 and the Bharat Bandh on 28th September. In the last few years, the agitation of farmers across the country has intensified. Farmers are constantly taking to the streets in various forms from strikes to long marches. On the one hand, it is clear that brutal attacks of capitalist policies are compelling not just the workers but also farmers to take to the streets. On the other hand, the social base against the capitalist attacks of the Modi government in power is widening. This movement is important in this regard. read more 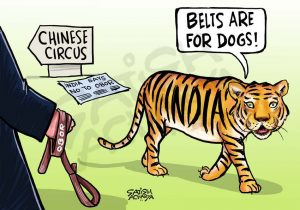 CLARE DOYLE reviews a comprehensive account of China’s Belt and Road Initiative and argues that the project is another form of imperialist expansionism.

“China’s Belt and Road strategy is acknowledged to be the most important geopolitical initiative of the age”, write the publishers of this fascinating book by Bruno Maçães. “It symbolises a new phase in China’s ambitions as a superpower: to remake the world economy and crown Beijing as the new centre of capitalism and globalisation”. read more