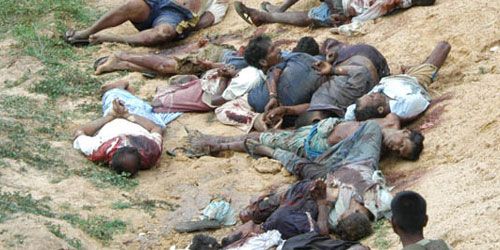 Fight the Terror of Capitalism

Fight the Injustice to Tamils in Sri Lanka , Manipuris, North Easern People, to the people of Jammu & Kshmir(in IOK and POK), to the fighters against POSCO, fight the perpetrators of false cases against Maudany, Abhay Sahoo, K K Shahina, Ajay T G, Soni Sori and thousads of Binayak Sens languishing in Indian Jails.

Bring the War Criminals of Sri Lanka to Books, We must renew and double or even treble our efforts, build up the struggle against the Capitalist regime in India and Sri Lanka.

It is not a struggle just of the Tamils in Sri Lanka or India, it is linked to all our struggles that we all strive to wage agianst AFSPA, Kudankulam nuclear Project, against Communalism and above all the struggle to end the dictatorship of the Capital and its profits.

These are same Capitalist, Communal and Cateist minds in Sri Lanka or India who brutalise the people who are fighting for Justice,be it Soni Sori, Maudany, thousands of Binayak Sens and Abhay Sahoos who are yet to get any justice, let alone a temporary bail.

In the aftermath of the screening of the Killing Fields on Wednesday 14 March millions across the world will be stunned and horrified by the images of the bloody massacre of Tamil people in Sri Lanka. Most will draw the conclusion that what took place is nothing short of genocide. And, once the shock fades, every viewer will ask: what can be done now?

Tamil Solidarity continues to stand out as a campaign that has exposed the horrendous nature of what took place, both during and since the so-called end of the war in Sri Lanka. But Tamil Solidarity is not a commentating organisation – we are about fighting to defend the rights of all oppressed people in Sri Lanka.

The Killing Fields documents how tens of thousands of Tamil people were cornered in a tiny area in the north of Sri Lanka, bombed, then chased away to another place, and bombed again. They were hunted down while fleeing, deprived of food and denied medical supplies. Forced starvation alone claimed thousands of lives. Summary execution, sexual violence and immense torture were meted out to those who surrendered. Refugees were treated worse than cattle. All this took place under the watchful eye of the United Nations (UN) and its member states.

The second part Channel 4’s ‘Killing Fields’ documentary by Callum McCrae captures some of this horror. To find out about more about how events unfolded please also read the review of UN spokesperson Gordon Weiss’s book The Cage here.

The documentary includes UN footage, and eye-witness reports from UN officials. The UN refused to take any action. In the interest of finishing off the LTTE many kept their silence on the massacre by the Sri Lankan government. And now they are all complacent in the covering up of the continued killing, repression and trampling of democratic rights by Sri Lankan government. The reprehensible resolution that has been put forward by the US in the UN exposes this continued complicity. The Indian and Chinese states, which both supported the Sri Lankan government with these horrendous killings (fundamentally to support the interests of big business in India and China), are still protecting the genocidal regime.

The documentary also exposes the poor role played by the Red Cross which claimed that the government’s action to ‘save the people’ was enough. The film footage also details powerful evidence of war crimes; the inconceivable cruelty revealed in the murder of Balachandran Prabhakaran is one example. The 12 year-old boy was shot seven times at close range after he was forced to watch the torture and execution of others. A huge amount of video and photographic evidence proves beyond doubt that summary killings and torture took place.

The Killing Fields also attacks the ridiculous counter-documentary produced by the Sri Lankan government. The only basis for that ‘documentary’ is doctors speaking against the LTTE under duress!

The programme concluded by asking how, in the midst of this wealth of bloody evidence, Sri Lanka has been chosen to host the Commonwealth Games in 2013. This highlights the conciliatory role of the British ruling class in the whole affair.

The Tamil Solidarity website has been documenting how the current Con-Dem government and the Labour government before it refused to take any action in defence of the Tamils. The Tories’ role was partly exposed in the Bell Pottinger scandal (http://www.tamilsolidarity.org/?p=1971). Disgraced former Tory Defence Minister Liam Fox was a close friend of Rajapaksa (http://www.tamilsolidarity.org/?p=1907).

Furthermore Tamil Solidarity has evidence in relation to the position of the Foreign and Commonwealth Office. There are secret talks taking place to seek out investment in Sri Lanka, even now. The work of Paul Murphy MEP for Dublin, Ireland, (http://www.paulmurphymep.eu/), a Tamil Solidarity supporter, in the European Parliament has been systematically opposed by Tory and the rest of the right wing MEPs.

At times Tory MEPs have argued in the interest of the Sri Lankan regime more vigorously than the Sri Lankan officials. There are a number of Tory MEPs who still deny the scale of the massacre that took place. Of course they try to give the impression that the British government is ‘concerned’ or ‘doing something’ – but that is an absolute lie. To advance UK big business’s interests they seek a kind of peace (and might even contemplate a change of president to achieve this). They have no interest in solving the national question of the Tamil-speaking people or even improving their lives in general. The cold cruelty they display towards the suffering inflicted by their cuts on the vulnerable in Britain is not spared the Tamil masses in Sri Lanka.

Three years has passed since the so-called end of the war. But, with IMF support, the Sri Lankan regime is now spending more money on defence than ever before. The military’s role is linked to the bigger question of strategic and business interests in the region – not the well-being of ordinary working and poor people.

Tamils and other human rights activists were, no doubt, shocked to see the prominent role given to former Labour MP David Miliband in the Killing Fields documentary. Miliband was the Secretary of State for Foreign and Commonwealth Affairs from 2007 to 2010.

Now Miliband is trying to position himself as on ‘our’ side. But it was his Labour government in power during the massacre. Desperate chants of “Gordon Brown, Gordon Brown, Save the Tamils” rang through the streets of London on demonstrations numbering over 100,000. Tamil Solidarity had to sadly warn that this chant would fall on deaf ears. Nonetheless a number of Tamils clung to their illusions that Labour would act, at least in the interest of human rights. But the experience of police repression of peaceful Tamil protests in Parliament Square proved the opposite.

Lib Dem MP Simon Hughes came to talk to hunger strikers in Parliament Square and made various vague pledges. We have seen no action yet. Miliband now accepts that the Sri Lankan regime is full of liars and acknowledges the horrendous scale of the massacre. But what opposition does he put forward – even in terms of opposing the Commonwealth Games in Sri Lanka or openly supporting the call for an international investigation into war crimes? Why didn’t he act to expose the Tories’ rather friendly approach to the Sri Lankan government? If he and Labour genuinely want to win the hearts and minds of Tamil-speaking people strongly opposing the cuts and attacks on the NHS would also be a good start.

Miliband recognises that things are changing. Labour cannot continue to take the electoral support of the Tamil population for granted, as it has done. The impact of this documentary and the ongoing debate among Tamils is not an isolated process. Tamils’ understanding of the the ‘them and us’ nature of society and how the oppression of Tamil-speaking people is part of that is increasing.

Tamil Solidarity has always explained that any government that oppresses or attacks its own people cannot be trusted to take any interest in challenging oppression elsewhere. Time and again it has been shown that corporate interests lie behind government actions.

How can any serious activist, for example, hope that the Indian government, which continues to viciously crush the right to self determination of the Kashmiris, would act decisively for democratic rights elsewhere?

Tamil Solidarity will publish further analysis on geopolitical developments and the hypocrisy of the UN resolution. Please read the Tamil Solidarity contribution to the debate opened up by Tamilnet, which we warmly welcomed, here.

To watch the Killing Fields documentary, particularly when you can speak the language and listen to horrific helpless cry out in Tamil, is nothing short of heartbreaking. Its impact will stay with us forever. No human should be reduced to this level.

We should not, however, be silenced by the genocide. In the aftermath of George W Bush unleashing the ‘war on terror’ the Sri Lankan government is trying to make the massacre into an internationally renowned example of ‘how best to solve the national question’. There are reports that the Turkish government is taking the ‘Sri Lankan route’ to solve the Kurdish question!

Tamil Solidarity argues that we can also provide an example – of fight back. We must not let the enormous anger, at the massacre and the evoking of it by the Killing Fields, go to waste. Through struggle, internationalism and solidarity we can prove for future generations that horror of this nature will not go unanswered; rather it will further intensify the fightback. To effectively resist the continued repression there can be not one iota of faith placed in the so-called ‘international community’, either the governments of the West or of India.

Through democratic, open and serious discussion, debate, united action and studying of history we can together learn to understand what is required to win. Let us fight to unite all those suffer to create a strength that will make sure that this sort of horror will never be repeated.