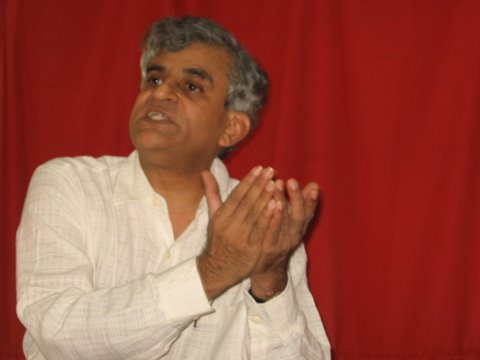 P. Sainath, the well known journalist (The Hindu Rural Affairs Editor), most famous for his reports on peasant suicides in India, spoke at the inaugural ceremony of the Vibgyor Film Festival (22nd Feb, 2012) held recently in Trissur, Kerala. Going with the theme of the festival – ‘Lives and Livelihood’, Sainath gave an inspiring speech on the topic “Inequality, livelihood and agrarian crisis” facing India.

Socialism for the Rich and Market Economics for the Poor!

Sainath started his speech with an satiric comment on the Govt. of India’s agonizing efforts, not at saving millions of its hungry citizens, but on its efforts to save Vijay Mallya’s failing airlines – Kingfisher! He mentioned that all talk of Banks independently trying to work out a solution for the airlines was nonsense and had all the covert backing of the Indian government. And who is Vijay Mallya? One of the 55 Forbes listed Indian billionaires and a recipient of subsidies worth millions of rupees from the government.

He criticized the farce that is being played in the name of parliamentary democracy, wherein in the last session, all the 38 days were wasted in discussing one Lokpal Bill (Ombudsman bill). But in the same 38 days in India, more than 1786 peasants would have committed suicides which works out to 47 suicides a day and 1 in every 38 minutes. Also in 38 days, over 78,000 peasants would have quit farming altogether which works around to 2000 a day.

In a typical 38 days, more than 3000 to 4000 children would have died of malnutrition and hunger. Many more times that number enter grade 3 or grade 4 level of malnutrition, which means permanent damages for life. None of this is happening due to any natural calamity but because of conscious economic policies. According to Human Development Report, malnourishment in Indian children is two times higher than children in Sub-Saharan Africa. Insensitivity by the government is shown by the fact that the Planning Commission went to the extent filing an affidavit in Supreme Court defending its controversial Rs. 25 a day as the official poverty line.

But on the other hand, in every union budget, there is a direct corporate write off worth Rs. 88,000, the budgeted amount for a universal Public Distribution System. All that it requires to save the hungry millions was a shift in the money being given to the corporates. Each year the Indian government subsidizes the corporates to the tune of Rs. 500,000 crore, enough for universal social services like health, education and others social security benefits.

Sainath also spoke of the assets accumulated by the Indian billionaires in 38 days. For example, Praful Patel (the former Aviation minister with heavy business interests) would have made more than Rs. 19 million in 38 days i.e., Rs. 5 lakh per day. But as far as Air India (national airline carrier) staff were concerned, no salary has been paid for the last 8 months. 20 years of neo-liberal reforms has only seen inequality growing with the country boasting the fourth largest number of dollar millionaires in the whole world. India has more millionaires than Scandinavian and Nordic countries put together.

According to the Economic Survey of India, food crop production had fallen dramatically in the last 20 years and is growing slowly compared to the population growth. This has raised the question of falling calorie intake. According to Planning Commission figures, India is worse off than Sub- Saharan Africa with countries like Rwanda having a food security situation compared to India. Number of hungry people in India is more than the rest of the world put together.

He also presented few of the tragic stories of rural peasants facing distress or have committed suicide. Cases ranging from suicides by women who have not been counted as farm suicides because women are not considered in the farmers list; or cases of peasants who did not have money to commit suicide (!), cases of peasants writing suicide letters to the PM and Presidents explaining their financial distress; or the tragic story of ‘3 weddings and a funeral’ wherein a community leader of the Banjara tribe in the Vidarbha region (Maharashtra) committed suicide on the day of the marriage of his extended family brethren.

Telecom minister likes to boost about the 70% mobile connectivity in India but is silent on the fact that a same percentage of people do not even have bank accounts, with most depending on moneylenders for credit. He spoke of the discriminatory practices by the banks that charge 7% interest rates for car loans while charging 14% interest rate for tractors & 36% interest rate to poor women through the exploitative NGO run Self Help Group’s (SHG’s).

Health was another area of major concern, with many peasants mortgaging their land to pay for their hospital bills. Chains of Corporate/ Private hospitals and privatization of existing public health services have all but destroyed what existed of the dysfunctional public health system. Number of people not seeking medical care (because of unaffordable medical bills) has only doubled in the last 20 years.

Migration and Crisis in Rural India

A large part of Sainath’s talk was focussed on migration. 2011 census was in many ways unique and frightening on the scale of migration. The last 10 years (between 2001-2011) witnessed one of the largest migration from rural to urban India, not seen in 90 years. All this only points out to a total collapse in agriculture & most of the new migrants forced to live in shanty towns with no basic facilities. This has given rise to phenomenon of “footloose” migrant with no steady employment or abode.

He gave the example of Ganjam district of Orissa, where nearly 400,000 Orriya migrant workers are now employed in the Power looms of Gujarat, working in 12 hr shifts at extremely low wages. The global economic crisis has only worsened the situation, with many of these workers being laid off thus resulting in social tensions back home.

Another instance of this agrarian crisis was in the Wayanad district of Kerala in the early years of the noughties. Wayanad which had always been known as an in-migration district (Gulf of Kerala), found thousands of peasants, day labourers and other workers leaving the region en mass to the neighbouring state of Karnataka, because of the agrarian crisis that saw thousands of peasants committing suicide.

Sainath spoke on the importance festival venue – Kerala. After 20 years of neo-liberal reforms, Kerala today is the most globalized state in India. This gains importance as most of the crops grown in Kerala are cash crops whose prices are determined by the global stock exchanges and the multinational corporations. It is also interesting to note that none of these produce is consumed locally Kerala itself and has little or no relevance as far as people of the state were concerned.

Kerala would be most affected in the event of serious economic downturn as the economy is linked to external factors such as global market volatility and others like tourism, remittances etc.

Processes at Work and Unravelling of the Global Economic Crisis

He outlined eight processes at work simultaneously in India as part of neoliberal policies of the Indian government, including the withdrawal of the state from the public sector, imposition of various user fees and burden of taxes on the people, huge cuts in life supports like food subsidies, unprecedented rise of corporate world, privatisation of everything, stunning rise of inequality, market fundamentalism and debt burden on the poor.

However, it is not all despair. The last period has also seen the unravelling of the global economic crisis. He spoke on the importance of the crisis facing Europe and America, and the significance of the uprisings in Tunisia and Egypt which was very much linked to the crisis facing capitalism worldwide.