The following is an eye witness account by a garment worker on the first massive strike by garment workers in Bangalore. Tens of thousands of workers (majority women) came out on the streets against the proposed restrictions on the withdrawal of amount in the provident fund (PF) scheme. Fearing a spread of working class protests across the country, the Union govt. has decided to roll back the PF restrictions for now.

While many activists are in a congratulatory mood in relation to the deferred date of new PF withdrawal rule, it is a mere postponement. The Capitalist ruling classes and the slavish political representatives will do everything at their disposal to return with a revenge and achieve what they want.

In our opinion it is no victory yet, the BJP and Congress are adamant on the issue of labour reforms and have been eying the PF corpus fund for almost two decades. Despite the violence unleashed by lumpen elements to discredit the workers struggle, it has also to a great extent brought in a questioning and fighting consciousness among the working class, which can be a harbinger for future struggles, especially against the looming anti-worker labour reforms which will alter the very nature of collective bargaining and right to form unions in work places. 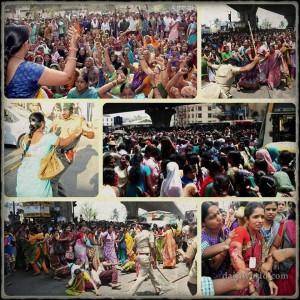 This was the first time that I have been in a protest. It was not organized by any party or union, it was spontaneous. Like most of my fellow workers, I went to work and by lunch time we heard slogans by workers demanding justice. When we stepped out, we saw thousands of workers and was told by the protesting workers that this was walkout against the new PF withdrawal rule. The protest had started by around 11 AM in the morning.

The word spread like wildfire through sms and whatsapp to nearby factories, men and women workers poured out on to the street and started walking towards Jalahalli cross for a sit in protest. Workers came out from all the factories in the Yeshwantpur belt. Being in the middle of it all, I was a bit overwhelmed, there were workers everywhere as far as the eye can see. It was especially surprising given that workers who would normally fear losing their pay for the day choose to walkout!

Even some mid level managers showed solidarity with the protest. Traffic was totally blocked near the Jalahalli cross, but that did not prevent the workers from coming. I said to myself ‘so, this is what a revolution looks like’!

However, our euphoria was short-lived. While a majority of workers choose to walkout, some preferred to stay back and work. A gang of goons, whose political affiliations are unclear forced many industries to shut down and pelted stones on those who refused. It all went downhill from there, with the police using this pretext to lathicharge workers, who were invariably women. None were spared by the police, they thrashed women, bystanders and we watched to our dismay how workers were being forcefully removed from the protest site.