The five State elections of 2011: The Democracy Drill-Stagnancy is the Change! 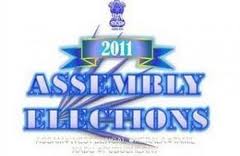 After month long arduous process of much trumpeted “Indian Electoral Democracy” the results for the just concluded elections for five state assemblies arrived a fortnight ago with a mixed bag. Though much of the results have gone on the expected lines, the verdict in Kerala is a bit of a surprise. The rejection of the Dravida Munnetra Kazhagam (DMK) rule in Tamil Nadu is of course something many did expect, but the sweep with which the corrupt rule of Karunanidhi and his coterie has been done with, goes to show the bottled up anger of the people in this southern state. read more

Ban Endoslfan Permanently! Justice to the Survivors of Endosulfan!

Perhaps you are aware that more than 9000 victims of Endosulfan have been identified in Kasargod district of Kerala alone, out of which over 4800 patients are bedridden.. Over thousand victims of Endosulfan have already died in Kasargod District. Similar effects are also being witnessed today in Idukki, Palakkad & Kannur in Kerala and Dakshin Kannada, Kodagu and Udupi and Bhatkal in Karnataka. Already, 74 countries all over the world have banned Endosulfan. A recent ban in Australia cited the health impacts in India as one of the reasons for the ban. In this context, we, the Peoples’ Solidarity Concerns, a forum of different activist groups in Bangalore, strongly condemn the stand of Government India for not calling for a permanent ban of Endosulfan. read more

Jagadish is part of the New Socialist Alternative, Karnataka which is the Indian section of the Committee for Workers International. He runs bi-monthly newspapers called, ‘Dudiyora Horaata’ (Kannada) and ‘Socialism.in’ (English). On a very rhetorical interview with him, Jagdish who introduced himself as a Trotskiist shared his stories of conflicts with mainstream Communist parties and Maoists in India, his views on socialism and criticism on contemporary model of socio-economic growth. He has been associated with VIBGYOR for the last 4 years and is part of the larger family of social activists who fight for and stand with people’s movements. Along with his active involvement in the anti-nuclear movement, he was also campaigning against the genocide of Sri Lankan Tamils. He started a movement called, ‘Stop the Slaughter of Tamils in Sri Lanka’ whose seed was sown during the VIBGYOR film festival, this later transformed into the ‘Tamil Solidarity’ which is now an international movement. read more 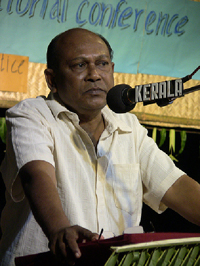 Siritunga Jayasuriya Addressing the Conference on “Justice, Peace and Democracy in South Asia”

The Fifth ViBGYOR International Short and International Film Festival was held at Sangeeta Nataka Academy Campus, Thrissur in Kerala, India from February 16th to 21st, 2010. Approximately 100 short and documentary films were screened at the festival. ViBGYOR promotes films with alternative views on the areas including social, economic, political, cultural, and environmental issues in the South Asian region today. Many radical intellectuals in the South Asian Region and other parts of the world were among the invitees in the festival. During the six days of the festival, a number of forums and mini conferences were organized on the social and political issues highlighted in the films. read more

The much awaited results of five state elections in India – in West Bengal, Assam, Tamil Nadu, Kerala and Pondicherry – have gone more or less along predicted lines. Except for the fact that the competing shower of promises of goodies and freebies in Tamil Nadu swayed the voters until the last minute, the rest of the poll exercise and the ensuing results went as expected. The ‘communists’ of the CPI(M) and CPI won 235 of a total 293 seats in West Bengal. They also won 98 of a total 140 seats in Kerala. The Communists, who have their biggest following in West Bengal and Kerala, are rivals to the Congress party in these two states, in spite of supporting the ruling Congress-led UPA government at national level. read more