Rage Against Rape – Protests in Kolkata

Park Street on 31st December night is usually a picture of grand illumination and huge crowds in a mood to party into the new year. But 2012 was a little different. The lighting on the streets took a back seat while candles took the lead. Crowd including housewife’s, students, social activists took to the street and sloganeered into the new year to protest against the growing number of rapes in the nation. While the country was mourning the death of the Delhi victim, reports swarmed in how a woman in Barasat (suburbs of Kolkata) was raped and murdered. read more 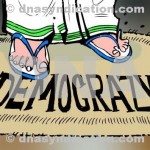 A change for Worse 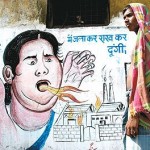 While the people celebrated a new dawn in West Bengal politics (2011), behind the cover the smiling tyrant was assuming more power by every strike of the clock. Bengal went to assembly elections in the summer of 2011 in the hope of a better future. Out of the 35 years of Left rule, the Bengali masses who had eargerly awaited for the CPI(M) to deliver on its promises, turned out to be oppressors in the garb of a Marxist flag. This was a clear case of the prophet turning the devil! read more 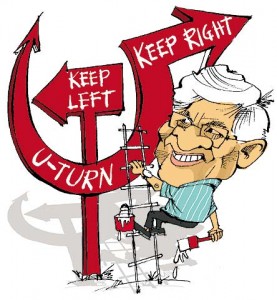 With the Presidential elections set to occupy central space in the coming days and the most likely victory of Pranab Mukherjee (the well known Congress party leader), as expected there was the usual political bickering orchestrated by the oppositions and rivals alike. All in all, Congress seems to have managed to gain a few brownie points over the opposition for now, even while its support base nationally continues to ebb. But one of the aspects which cannot be ignored this time was the decision of the Communist Party of India (Marxist) – CPI(M) to vote in favour of the Congress candidate – Pranab Mukherjee, that really defied all sense of imagination. read more

Mamata Banerjee and her ten months of maverick politics 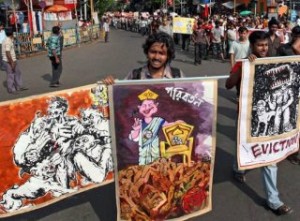 10 months completed at the Writer’s Building and the people in Bengal who once came out in huge numbers to elect Mamata Banerjee’s Trinamool Congress (TMC) in hope of some relief from the 34 years of CPI(M) misrule, are already relenting this change. It’s a pity that the youth who campaigned for the TMC some 11 months back wants re-election so that they can vote for the CPI(M) led Left Front not because they are good but because they are the lesser evil, or at least that is what they hope now. Because life for them has not really left them with any other alternative rather than to hope against another political hope. So let’s try and look into some of the news that have making headlines lately and the entire hollowness behind what was once hailed as an historical change. read more