In yet another act of going against the popular and democratic wishes of the local people, the UPA government led by Congress party is on a “death speed” spree to clear the investment proposals to appease its rich International and National money bags!!

South Korean giant POSCO was hurriedly given environmental clearance to build a mega 12 Million Tonnes per annum steel plant displacing more than 22,000 people from their land, comprising of over 4,004 acres in Odisha. read more

A protest was held at the Town Hall in Bangalore against the forced land acquisition by Posco in Orissa and the burtal violence by corporate goons and the state upon children and women.

Kaveri Rajaraman, an activist from Bangalore, spoke about Posco’s demand for a captive port in Orissa and how the forced land acquisition would affect the livelihood of the people earning through beetle vineyard and cashew plantation within that region. She spoke about the protesters from the villages of Jagatsinghpur district who are carrying out their struggle, about their methods of involving their children and creating a protective circle around the women and men at the core. She also talked about how well organised the protesters are and how well educated everyone is about the issues that concern them. read more 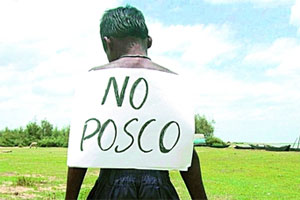 The following press release statement by the POSCO Pratirodh Sangram Samiti (PPSS) is with reference to the latest manoeuvring by the State government of Odisha by suddenly announcing Rs. 2000 million CSR package for the region. But as the history of the whole movement teaches us and as correctly pointed out in this statement that this nothing more than another ploy by POSCO and the government to try divide the people when all other methods to intimidate the people have failed. read more 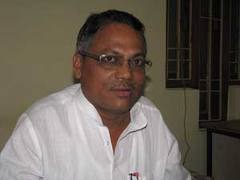