On the occasion of International Women’s Day 2015, New Socialist Alternative in Bangalore participated in protest rally organized by several women’s group in Bangalore in which over 2000 people participated. We also distributed over 1000 leaflets in the rally.

In Pune, our comrades had organized a small meeting on the occasion. We had Prof. Swati Rajan as the main speaker. About 30 people attended the meeting.

The Bengali community (especially students and young people) in Bangalore rose up in solidarity against the recent state violence on students of Jadavpur University. On the 17th of this month, male students were beaten up and girls students molested in a barbaric dead-of-the-night police assault on the students carrying out a peaceful sit-in demonstration. The students were particpating in a non-violent protest demanding an impartial probe into an incident of sexual harrassment of a student at the University earlier last month. An eye-witness account of what happened in Kolkata including the role of goons from Trinamool Congress (TMC) can be found on our website here

The protest was organized by a group of Bengali students, including ex-Jadavpur university students working in the city. The protest drew a good response from the Bengali community, students and young working professionals in the city participating in the protest. Ho Ho Hokolorobo was the mostly widely heard slogan as the 400-strong crowd raised slogans in both Bengali and Kannada denouncing the brutal police apparatus, the equally and completely complicit state government as well as both the major political parties in West Bengal – CPI(M) and TMC. The protesters demanded the resignation of the VC of Jadavpur University as well as impartial probes into the sexual harrassment incident and the police brutality on 17th of September. The young crowd raised powerful slogans and sang songs of solidarity and protest. Few of the ex-students from Jadhavpur university delivered speeches and gave detailed updates on the events happening in Kolkata. The protest lasted for over three hours with the same infectious enthusiasm and energy.

A very united and spirited show of solidarity by many, Student’s & Dalit organisations, Political Groups, Women organisations and many prominent progressive personalties against the dastardly police attack on the Students of Hyderabad University who are seeking Justice for Rohit Vemula who was a victim of Casteist conspiracy. The Protest also condemned the Hindutva Vigilantism which has gone on a spree of lynching and killing people especially the Muslims in the name of Cow protection. The gathering also extended Solidarity with Honda Workers of Rajasthan who are fighting for basic Workers Rights to form a Union and abolition of Contract Labour practice. Meeting was addressed by many representatives who were highly critical of the Modi administration which is showing its true colours on all sections of people through its draconian policies and has unleashed an undeclared EMERGENCY to coerce people.

Down with RSS sponsored Hindutva Vigilantism and Authoritarianism of Modi led BJP government!

The protest banners held by two former FTII students at the recent International Film Festival of India (IFFI) in Goa goes to show that their struggle is far from over. It was a prolonged battle that was debated to the core and got the attention from the whole country. 139 day strike was called off by the FTII students on 28th October after nearly five round of talks with Information and Broadcasting State Minister Rajyawardhan Rathod, but did not bring any outcomes favorable to the students. Students were only assured that ministry will think of their demands and that nothing can be forced on the ministry by the students.

After Narendra Modi led BJP govt came to power in May’14, Hindutva forces have become emboldened with its mouthpieces making outrageous and unconstitutional statements one after another. Many people close to BJP or its ideology were appointed on important posts in the administration which was highly criticized. In IIT-Madras, Ambedkar-Periyar study circle was banned. The ban was removed after protests and a huge social media uproar from all over the country. One of the many struggles which rose unexpectedly against this ardent Hindutva ideology was the FTII students struggle.

On 12th June, 2015, central I&B Ministry appointed Gajendra Chauhan as Chairman of FTII, Pune for next three years. When students tried to find out his contribution to the film industry, they found him to be a B grade movie actor, small time TV star and little skill set to head the prestigious institute. What they also found was Gajendra Chauhan is a member of BJP since 2005, belonging to Modi supporters’ camp in BJP. They had to take a call whether to tolerate his appointment in silence and let institute be a home for Saffron ideology or to fight for a progressive institute open to all and door to worldwide cinema.

Students came together and decided to challenge his appointment. They also raised questions over the capabilities of the four members of the institute’s Governing Council who were related to BJP or its other wings, with some of them having held important posts. The students decided to strike with demands for canceling the appointment of Gajendra Chauhan, electing the Chairman of the institute in a democratic way, dissolving the Governing Council and giving 50% participation to alumni’s of FTII in electing the Governing Council members. Thus began their infamous strike. 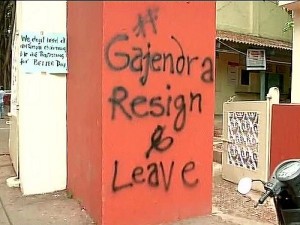 In the beginning, the struggle was wide spread with many from Bollywood including actors, directors, music directors and people from different art forms supporting the students strike and demands. When the Govt. realized the weakness of its position, it along with media started to defame the students as alcoholics, drug addicts, regular failures in academics and some illegally using campus. This criticism came as a shock for the students protesting in a democratic way for their just demands.

They managed to hit back and put their stand in a stronger way in front of the people making vile accusations against them. Arun Jaitley, Cabinet I&B minister rejected demands of the committee which met him on behalf of the students, which included Rasool Pookutty (an Oscar award winning sound designer). With the struggle gaining more support, RSS mouthpiece – Organizer stepped in accusing the students of being anti-Hindus. Subramanian ‘Susu’ Swamy in his characteristic way accused students of being Naxalites. This showed Govt. was not ready to bear even a little opposition to its agenda. On 50th day of struggle, Rahul Gandhi visited the campus and supported students demands. This constituted a ray of hope amongst students and they decided to take their struggle to Delhi at the Monsoon Session of the Parliament. Activists and people in solidarity with students protested all over the country. New Socialist Alternative also protested at Pune and Bangalore in solidarity with the students.

Continuous pressure from the govt. to end their stike, unbearable criticism from media, threats of physical attacks against them have taught the students as to what lengths the ‘state’ machinery can go to bring down their protests. The police arrested five students at midnight on fake charges of detaining institute’s director, Prashnath Pathrabe on campus. The students were released by the court the next day on bail. The struggle was difficult to continue because the current Govt. was elected with a majority in parliament. Many socially aware people and even youngsters fell to the propaganda made by Govt. and media of defaming the students. It made the struggle tougher for the students. The students have even explained their hardships and all their feelings in a letter addressed to I&B ministers, which is present on their Facebook page- FTII Wisdom Tree.

The struggle also has also taught students many important lessons. It taught them what fighting together is and what it means to take on the whole Govt. machinery/system. This most prolonged struggle in the history of the institute has really tested their resolves to the limits. The immense support from all over the country and internationally must have been surprising as well as enthusiastic for the students.

There can be a debate on the strategies adopted by the students. Award-winning filmmaker and supporter of the struggle, Jahnu Barua said, “Students should have first begun their protest with a series of dialogues. If that failed, they should have resorted to calling the strike.” There can be different views on what stand the students should have taken on different stages of the struggle. But, what is more important is to understand what this struggle has taught us and what lies ahead for the different struggles against this communal govt. This struggle is definitely going to impact on the way Govt. takes decisions and also on how it deals with such struggles in the future.

It can also be said that FTII students struggle was one of the factors that led many of the prominent personalities in the country to return their national/state awards granted to them by various governments in the past. This comes in the wake of Modi’s silence on the Dadri lynching over beef issue, burning of two Dalit children in Haryana and many controversial statements by BJP MPs and ministers. This combined together to play a key role for the BJP’s loss in the recent Bihar state assembly elections.

Now, the students have decided to continue the struggle in a democratic way with new forms of protests. New Socialist Alternative stands in solidarity with the students struggle until the institute is in a position to deliver excellence to its future batches, which is, in short, what students demand.