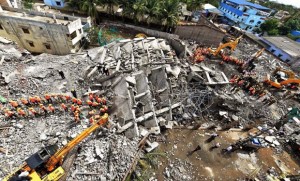 During the launch of PSLV rocket on June 30th, Prime Minister Narendra Modi boasted that India’s Mission to Mars is cheaper than the Hollywood movie Gravity. If there is one thing that is really cheap in India it’s the life of millions of workers who have migrated to urban Metropolitan cities from the rural areas in search of livelihood which the rural economy has failed to deliver as India is more and more adopting neo-liberal developmental model.

The workers who have migrated to Metropolitan cities are forced to work and live under miserable conditions. They are recruited as casual laborers in jobs ranging from construction to maintenance workers in Special Economic Zones. Employees hire and fire at will and they are not welcome by the urban middle class as well. Even the native working class of the metropolitan cities fall prey to the right wing regionalist propaganda and tend to see the migrant workers as enemies who compete with them in the labor market. Left without any kind of organization both in the working place owing to the casual nature of labor and in the society owing to the migration, they form one of the most vulnerable sections of the society. They form a considerable section of the 840 million Indians who live under a wage of Rs 20 per day.

On June 28th an 11 storey building under construction collapsed in Chennai leaving workers trapped under the rubble. After a weeklong rescue operation the death toll is more than 60. The builder “Prime Shristi” was quick to react and claimed that it was the rain and the thunder that caused the collapse. But the committee of experts concluded that it was a flawed construction that led to the collapse (NDTV). The collapsed building along with another 11 storey building was being constructed 500m from the Porur Lake, the location the report says is unsuitable for high raise buildings. With this the bureaucratic irregularities that allowed the construction have also come under scanner. The adjacent apartment that is constructed by the same builder has also been deemed unfit and will be demolished by the government authorities.

The real estate boom is a part and parcel of the capitalism with the state actively participating in creating cities that act as Industrial Hubs and epicenter of urban growth. Real estate sector in Indian is expected to touch 180 billion US $ by 2020 with a compound annual growth rate of 19% in the period of 2010 – 2014 (ibef.org). But this growth is never reflected in the lives of those workers. Even those who are indulged in the government projects like metro railway construction, roads, Bridges, flyovers share the same conditions of those who work for private realtors. There are accidents that cost the life of the workers that go unnoticed and are compensated under the table by the builders. The Tamil Nadu government has announced a compensation for the families affected but that is not the solution.

The immediate need is the unionization of the migrant and casual workers and struggle towards a living minimum wage, restricted working hours and livable housing conditions while simultaneously struggling towards a egalitarian distributive developmental model under democratic socialism as against the exploitative unequal development that capitalism is capable of delivering.