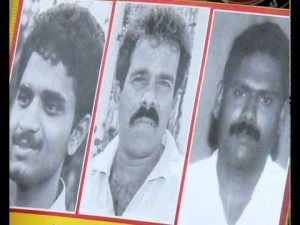 In a system where Soni Sori’s are raped in custody and waiting for justice; Modi’s aquitted of massacres due to lack of evidences; Sheethal Sathe’s branded as enemy of states and left in jail; judges issuing verdicts after discovering spirituality from seeing a monkey in the court room; Afzal guru’s hanged over night to satisfy the carefully constructed collective conscience, justice in India is a sheer accident!!!

In one such instance of “accidental justice” the Supreme Court on 18th February commuted the death sentence of Santhan, Murugan and Perarivazhan to life imprisonment who were convicted in relation to the assassination of Rajiv Gandhi in Sriperumbudur when he was on his election campaign in 1991. The court cited long processing delay of more than a decade by the state on their mercy petition as it did weeks before on the death sentence of Veerapan’s associates and rejected the government’s argument that the three “enjoyed their life in prison”.

The court also cited that the Tamil Nadu government can grant remission to the convicts under its executive powers. Jayalalitha was quick to react, and thanks to the upcoming elections, she passed a resolution in the cabinet to release not just the three but also the other four convicts of the same case who were under life imprisonment. These events evoked sharp reactions from various quarters.

While the parties in Tamil Nadu all carefully chose their line to go with the Tamil Nadu governments decision, the national parties Congress, BJP and also the AAP criticized the release of the all the seven. The center moved against the Tamil Nadu’s decision in Supreme Court citing constitutional reasons and made an appeal to review its decision to commute the death sentence citing delay. The centre is hell bent on retaining the death sentence of the convicts as otherwise they have to confront the uncomfortable questions over hanging of Afzal Guru which has already begun to surface.

There were one sided debates held in the media which all shouted in one voice “should the killers of Rajiv Gandhi be released?”, not considering the sensitivity of the case, the manner in which the investigation was done and the charges with which they were implicated. For example Perarivazhan was charged with buying a 9 volt battery. But lately the investigating officer came out and confessed that he has wrongly recorded the evidence, given the pressure on the investigating team to solve the case. But all these facts fell on the blind side of the media. The media does not have the courage to debate on the open points which the Jain commission has cited in its report. All it can do is to mute the voice of debators like what happened to Thirumurgan Gandhi (May 17 Movement) in the middle of the Times Now debate when speaking about the Jain commission report or spit a communal venom by asking “Is the life of a Tamil more precious than the life of a Kashmiri?” and then go on for hours debating about the integrity and sovereignty of India.

For now the movement against death penalty has taken a small step forward. There is a long way to go in abolishing death sentence from the Colonial Era IPC. What lies ahead is not just a legal battle but also a need to change the mindset of public which is made to equate justice with retribution and a move towards not just a reformative justice system, but to a socially and economically Just society.