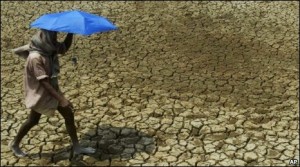 The effects of the environmental crisis are forcing workers and the poor to resist throughout the world, as the poorest states are hit hardest. This is particularly true in countries like India, where extreme weather events, most probably linked to climate change, are causing massive devastation. Data from the most recent report of the main climate science body, the Intergovernmental Panel on Climate Change (IPCC), and others confirms this.

The western state of Maharashtra has been particularly badly affected suffering the worst drought since 1972. This has led to a rapid depletion of the water table in the worst-hit areas like Marathwada. The mangrove forest cover in Maharashtra has been reduced by 40%, causing a further twist to the cycle pushing up temperatures since the forest absorbs the greenhouse gases that drive global warming.

In the early part of the first decade of the 21st century there were serious droughts in northwest India leading to a sharp decline in water tables. There were consecutive droughts in 2000-02 in Orissa that caused crop failures and mass starvation, affecting eleven million people. There was another drought in northeast India in 2006 when the monsoon failed.

Alongside these droughts there were devastating floods in the northeast in 2002, 2003 and 2004. A record 944mm of rain fell on Mumbai on 26-27 July 2005, causing 1,000 deaths and a loss of $250 million. Although the frequency of cyclones in the Bay of Bengal has declined, their intensity has increased, leading to severe floods.

The Himalayan glaciers, which form the largest body of ice outside the polar caps, are under serious threat. They supply the complex of rivers and deltas across the north of the sub-continent that are a lifeline to hundreds of millions of people – the Gangetic basin alone is the home of 500 million. The Himalayan glaciers are receding faster than in any other part of the world and this indicates that the rivers of the region such as the Ganges could become seasonal – flowing only in the rainy season – leading to major economic and social disruption.

The 2007 IPCC report asserted that, if present trends continue, the glaciers could disappear completely by 2035. This conclusion has since been challenged but it is clear that, even if the IPCC date prediction is not accurate, there is still a serious threat. In fact, the effects of global warming could be felt much sooner than current models are saying due to so-called feedback effects, or tipping points.

Climate change effects are not the only threat to India’s environment, however. Contamination from nuclear radiation is also a major problem. Indian government policy to expand the use of nuclear power creates the possibility of a new disaster like at Chernobyl, Ukraine, in 1986, as well as compounding the unresolved problem of how to safely store toxic nuclear waste for over 100,000 years. Like most governments around the world, the Indian administration tries to justify nuclear power because it does not generate the greenhouse gases that cause global warming.

The epic struggle at Koodankulam in the southern state of Tamil Nadu against the construction of a nuclear power plant shows the depth of the resistance and the determination to fight back. It is one of the longest movements in the history of India, and has had to endure years of police attacks and brutality. In September 2012 there was a protest march to the facility that left one person dead and many injured after being attacked by the police. Yet despite relentless violent attacks the villagers have not responded in kind. Even after a case of sedition was taken out by the authorities against 55,000 people including children, the protesters have remained resolute.

The nuclear facility is built exactly on the spot where the 2004 tsunami had its most devastating effect when it came ashore. There is a colony built for the survivors that is just 500 metres from the plant. The opposition movement is no doubt fuelled by the experience of the Fukushima catastrophe, where the impact of a tsunami in 2011 led to the meltdown of three nuclear reactors on the site and the release of vast quantities of radiation.

The government is subsidising the Russian firm, Atomstroyexport, to build the new power station at Koodankulum. The Civil Liability for Nuclear Damage Bill, passed in 2010, limited the liability for foreign suppliers to Rs500 crore (£61m), much lower than that demanded in other countries. To make life even easier for the multinationals, the government tried to transfer most of the liability to the operator, in this case the Indian government-owned Nuclear Power Corporation of India Limited (NPCIL). In other words, the risk of future disasters would have been carried by Indian taxpayers. After a campaign by environmental groups this was overturned and the suppliers have been forced to bear some of the risk.

The Indian government plans to generate 25% of energy from nuclear power by 2050. The present 20 nuclear stations generate only 3% of energy, so the scale of the expansion is very large. Seven reactors are under construction and at least 35 more are planned. These will be massive, with up to 10,000 MW installed capacity at a single site. The French firm, AREVA NP, has agreed to build six 1,650 MW reactors at Jaitapur in Maharastra which will make this the largest single nuclear site in the world.

There has been a long-running campaign against the construction of the plant which will generate 300 tonnes of toxic nuclear waste every year. Local farmers have refused compensation offers from NPCIL because they are afraid of the radiation dangers, not least because the site lies in an earthquake zone. Since 2009 they have staged continuous protest actions with thousands of arrests and one person shot dead by the police.

Other multinationals have been given contracts to build plants in different areas: GE-Hitachi Nuclear Energy at Kovada in Andhra Pradesh, and Westinghouse at Mithivirdi in Gujarat. According to the US-based Centre for Responsive Politics, 20 multi-national companies and industry organisations, including the AREVA group, have paid lobbyists to promote their interests. The lobbyists will find, though, that the Indian people will not forget the health and safety record of big trans-national firms after the outrageous way the Union Carbide Corporation behaved in the disaster at Bhopal in the 1980s.

Although the risks of expanding nuclear power so rapidly will be considerable, the effect this will have on cutting greenhouse gases will be very small. An official committee set up to investigate energy policy found that, even if nuclear is expanded 20-fold by 2031, the government target, it will still only contribute 5-6% of the total energy output. This clearly indicates that any theoretical gain in greenhouse gas reduction is not worth the risk.

Campaigns against climate change effects and the nuclear threat will grow as the crisis deepens, since workers and the poor are being hardest hit. The fundamental cause of environmental degradation is the same in India as in the west: that is, the quest for profit by big corporations and the policies of the governments that represent them. An understanding of the need to remove the power of these institutions is a vital first step for campaigners everywhere if a permanent answer to environmental threats is to be found.