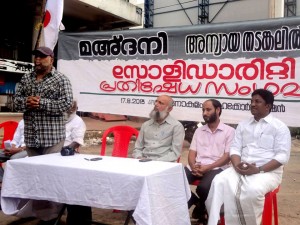 “Denial of Justice to Abdul Nasser Maudany is a conspiracy of sorts, not only it is a communal conspiracy, but a social and political conspiracy, but increasingly turning out to be a Judicial conspiracy too-system” – said Jagadish G Chandra a prominent Political & Human Rights activist from Karnataka

He was inaugurating the Protest gathering organised by Solidarity Youth Movement in Eranakulam. The title of the meeting was “Maudany- The representative of Muslim youth who are denied justice “, the public meeting was held on the occasion of 3 years of Maudany’s arrest in connection with the Bangalore Blasts case.

The Indian state’s plot to brand Maudany as a terrorist arises from the fact that the Islamic Spiritual leader, growing in political stature and trying to unite the Daliths, Adivasis and Muslim minorities under one banner of the oppressed by demanding Power to Avarnas (Power to the Marginalised).

This unity call which had a reverberating effect in every nook and corner of Kerala, threatened parties of the establishment including the so called left. The massive response to Maudany, was seen in the mammoth gatherings that he attracted, his stand of solidarity with the struggle of landless Daliths in Chengara, threatened to change the very equation politics in the state of Kerala.

It is a travesty of justice that Maudany, who languished in jail for 9 and 1/2 years in connection with the Coimbatore Blast case, though was completely exonerated, is again behind bars on a completely hoax of a case for the last three years.

Maudany is an unfortunate symbol of the farce of the Judicial System In India, in whose jails there are hundreds if not thousands of innocents, Daliths, Muslims, Adivasis and activists who are branded as terrorists.

Jagadish G Chandra who inaugurated the meeting said there is a need for a more wider campaign on the issue of State fabricating false cases, only militant-democratic peoples movements can bring justice to Maudany and others who are languishing in Indian Jails.