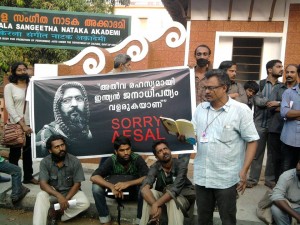 Following is the Press release issued by Peoples’ Solidarity Concerns-Bangalore condemning the attack on Media activists and distinguished documentary film makers of Kerala. New Socialist Alternative (CWI-India) is part of this platform of various people’s organisations and radical individuals.

It is a matter of great concern for all democratic multitudes of our society that the Indian state in general is increasingly becoming blatantly repressive against activists and all forms of democratic dissent and protest.

In February 2013, when the radically very popular ViBGYOR Documentary film festival at Thrissur, Kerala was on, the shocking news of Afzal Guru’s hanging at Tihar Jail shook all the genuine democratic and secular  forces in this country. What was particularly unsettling was the surreptitious manner in which this entire dispensation of “justice system” happened.

It is indeed ironic to note that a very well made documentary ‘FABRICATED’ was shown as a premiere at this festival. But less was known at that time, as what was  to be unleashed by the Police of Kerala in active connivance with the Indian state. Using the innocuous and flimsy reason of a protest demonstration that took place to express the democratic dissent against the hanging of Afzal Guru in particular and Death Penalty in general, the police have foisted fabricated  cases against K.P Sasi, the renowned film maker and activist; I Shanmukhadas, a well known Film Critic; Prasannakumar T N, a film activist; Shafeek, a young Journalist and Deepak, a Film maker and Film Society activist for ‘rioting’, ‘unlawful assembly’ and ‘public obstruction’ (IPC Sections 143, 147, 149 and 283 )

This peaceful protest with speeches and recitals of renowned cultural personalities was  organized on February 11, 2013 near the entrance gate of the festival venue Sangitha Nataka Academy, Thrissur which  lasted not more than an hour. It in no way amounted to an unlawful assembly, public obstruction or did cause a communal riot that day or later.

Though this wanton act of trampling democratic rights may look like yet another act of flippancy on the part of the police, but what is at stake is the constitutional guarantees that we all think are in place.

While India claims to be the most populous  democratic entity in the world, it has remained outside the purview of Universal Declaration of Human Rights by opting out on the abolition of Death Penalty, while smaller countries considered as much backward such as Eritrea, Gabon, Ghana to name a few,  have gone ahead to abolish capital punishment. In total, 140 countries have taken a firm stand to abolish this inhuman act.

But India which boasts of a mature civilisation and culture has failed to humanise its law practices and finds a prominent place in the list of 58 countries that have retained Death Penalty.  Though the Supreme Court of India  ruled in 1983 that the death penalty should be imposed only in “the rarest of rare cases, the Indian state of late chosen to ignore that word of caution & restraint. The manner in which the recent hangings especially of Afzal Guru shrouded with  scheming  and clandestine operation goes to show that all forms democracy and avenues of natural justice are being treated with impunity.

As of 11 February 2013, officially, there are 476 convicts on death row in India. States with the maximum number of prisoners on death row are Uttar Pradesh (174), Karnataka (61), Maharashtra (50) and Bihar. Unofficial estimates by popular press, says as big as 1400 prisoners await Death Penalty.Given the manner in which the Indian state has acted recently, it is now certain that a blanket approval for all these legalised killings will come about.

What is noteworthy is the fact that in the case of Prof. Bhullar, the European Parliament passed a resolution stating that India should abolish the death penalty and grant clemency to Bhullar. Young and unfortunate  Perarivalan, Santan and Murugan, who have been falsely accused and convicted in the infamous Rajiv Gandhi Assassination case is round the corner to be executed.

It is with this heightened urgency that the Human Rights activists like the above mentioned have a duty to be on the vigil so that the fabrication and false cases do not pass as justice dispensation.

The Constitution of India provides the right to freedom, according  articles 19, 20, 21 and 22, with the view of guaranteeing individual rights that were considered vital by the framers of the constitution. The right to Freedom of Speech and Expression has been subjected to a severe attack by the political establishment time and again. While the infamous “Emergency” still haunt the memories of many activists, the heat of an undeclared Silent Emergency can be felt everywhere.

Those who are fighting and resisting Capitalist Globalisation in India have faced increasing threats. Dalits and Adivasi fighters, Urban Slum dwellers  who are fighting the land grab by the multi nationals and national conglomerates are faced with the menace of branding as terrorists and cases are fabricated to silence them.

Now this attack on the five distinguished activist citizens of Kerala points to us the draconian direction that the state machinery is taking . This infringement of fundamental rights needs to be condemned unequivocally.

Many of the participants at the said date confirm vociferously that nothing of the character of Unlawful assembly, Rioting  or Obstruction of public ever happened on that day. Yet IPC sections 143,147,149 and 283 have been foisted on these five activists. This is a wanton indulgence to silence the democratic right of dissent and scare the people who are increasingly seeing the truth. Senior police officials who indulge in such mall practices of subverting law are never questioned or punished. It is time that we call the bluff and make them accountable.

The Peoples’ Solidarity Concerns-Bangalore, a platform of various activist organisations and individuals, demands that the fabricated charges against the five distinguished activist citizens  be dropped immediately.

The right to freedom of expression is a fundamental right , and no impingement or attack on it can be ignored, we call upon the Indian State in general and Kerala Police in particular  to back off and stop the harassment.

We earnestly demand that the police officials responsible for foisting false cases on these five activists be brought to the book through an independent inquiry and punished suitably.