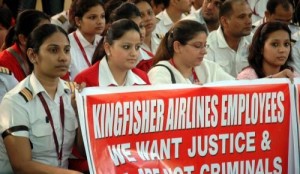 The following article is written by K Khan, an IT employee and a member of All India IT Employee Association (AIITEA). With the crisis ridden Kingfisher airlines still trying to stay afloat thanks to government inaction and continuing delays in employees salaries that have led to strikes, this article looks at the lack of unionization of workers in these corporatized sectors and the urgent need to form unions in the face of economic downturn.

Like all other Kingfisher products, the launch of Kingfisher airlines was a very glitzy event, and it was touted as the start of “Good Times’ for the air travel industry. Kingfisher was considered to be the airline of choice for the elite class.

No one could have ever imagined at the time that underneath all the glitz and glamour there was a big problem inherent within.

Imagine if 3 years ago you tried to tell the ‘Smart Bankers” and the ‘Most Intelligent Auditing Consultants’ that there could be a potential risk with Kingfisher. They would have simply looked at you as if you had just walked out of a mental asylum.

Now, coming back to the topic of the Kingfisher airlines, it is such a shame that even now many ‘White Collared’ employees shun the thought of an employee union. Who is to be blamed for this sense of this over optimism? While the industry heads keep harping that unions and associations are meant only for the Labour class, but they carefully keep in dark the fact that NASSCOM, CII, and many other such groups are associations and unions formed by the rich masters to ensure that together they can influence the Governments to frame policies that are in the interest of the managements (no matter which party comes to power they are always able to get their way through).

It is high time the white collared employees joined hands together and politely (and professionally) raised questions to their managements as to why is there a fear of employee unions in the mindset of the managements? Why does the management discourage employees forming unions? Is it because they are afraid of the transparency they will have to adhere to?

We have already experienced many scams and scandals. We have seen the glorious rise and shameful fall of many corporate companies, yet the middle class ‘White Collared’ sector is yet to understand the realities and wake up to take its rightful position in the social and economic decisions.

While it is common to hear from IT employees that they cannot form or join a union or association because their company policy does not allow them to do so. It is very ironic that the very same ‘educated’ (many of them Engineering and PG Graduates with MBAs from top notch colleges) have unfortunately not taken the time to read and understand the constitution of India carefully. It is also shameful that neither the Government nor any of the Unions themselves have come out to explain the ‘Educated IT Employees’ that as per the Article 19(1) C of the constitution of India, it is every Citizen’s “Fundamental Right” to form or join a union or association. It is so sad that even in the age of information technology, the educated and graduate masses are ignorant about their basic fundamental rights.

All India IT Employee Association (AIITEA)