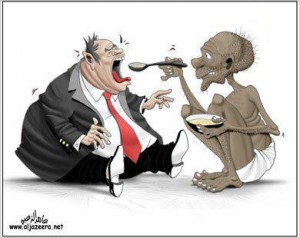 The following article is written by Vinyashree, a student activist from St. Joseph’s college, Bangalore. The article speaks of the big divide in the Indian society between the super rich minority and the majority (836 million on Rs. 20 a day) and poses that inevitable question of whose democracy is it anyway i.e., the democracy for the millionaires or the democracy for the multi million masses.

The Preamble of the Indian constitution promises justice to its people and by justice it means to provide social, economical and political justice. And by economic justice it means efforts to bridge the gap between the rich and the poor.

For this our political establishment has chosen the tool development. As India has shifted from undeveloped to developing, the urge to develop more and more has increased. But the sort of developmental model adopted has come at the cost of the majority. India in recent years has tremendously grown but it has failed to really develop. India has launched Agni 5, has metropolitan cities, has improved technically, has high infrastructure, developed transport system, nuclear power and so on. But the known truth is that all this has only benefited the ruling elite and the multinational companies.

This favourable attitude towards the rich, hides behind the blood, sweat and tears of the working poor. And the country which has money for big business, is all of a sudden too poor when it comes to providing welfare and social security benefits to the majority of its citizens. And recently when Supreme Court of India directed the Government of India to organize the distribution of food grains free to the poor instead of letting the grains rot, Prime Minister Manmohan Singh’s response was that “It is not possible in this country to give free food to all the poor people”.

But the same government could provide Rs.3.5 lakh crore (2010-11) as economic stimulus to the industry and also provide for Rs. 21.25 lakh crore as the total revenue foregone between 2005-11 in sops and tax concessions for industry and big business. Indian black money deposits in foreign tax havens amount to a whopping $1.5 trillion. And yet they say they have no money to revive the agrarian sector and preventing farm suicides, or money for quality universal education for all, tackling malnutrition etc.

If the same amount of money that the government is wasting on big business were to be used for the welfare of the majority, will it not make a big difference? But quite frankly the government has no inclination to move in that direction. This state of discrimination has become so unbearably prominent that the true meaning of justice according to our constitution has become meaningless.

Is India truly a democracy or is it a dynastic rule of the millionaires and billionaires? This is a question that keeps coming up time and again.