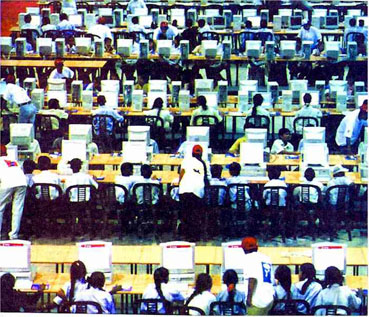 The following article is written by Gautam, a former IT employee on the false illusion that has been created around IT revolution in India. The article is a critique of the corporate system which is nothing more than exploitation wrapped in management jargon and terminology.

To put into context what IT revolution in India has ‘made possible’ for the so called IT professional, it has only given a falsely exalted position about themselves. In India, particularly after the initial years of the Manmohan Singh led reforms, the supply of labour has always remained much higher than demand. Consequentially, this has had a bearing on the wages which has remained low.

How do these enterprises get away with it? What are the structural changes that have made this well oiled ‘money making machine’ (the outsourcing industry) possible? The progress of capitalism over the last couple of decades has been given a real impetus by the ‘world of management science’ however dubious or spurious these theories might be.

The structural changes that have come about have created an ‘inverted’ power pyramid like structure wherein the top executives sit at the top and the lowest ranked worker at the apex of the pyramid which unfortunately for the worker, is inverted. There are far too many levels where power has been carefully delegated. These tiers are inherently antagonistic to each other and don’t have any kind of common stake.

The most vital cog in this machine is the ‘manager’ who has very little to offer in terms of doing any real ‘work’. The manager can be viewed as a feudatory to the ‘board of the company’. In other words, the manager’s position is unequivocally connected to the company’s well being. But the workers’ fate is anything to do with that of the company. A middle level manager is doing a good job if every worker has 100% plus productivity. The workers are pitted against each other and an internecine struggle ensues which keeps everybody busy only with their own welfare. There is no sense of belonging which a worker shares with a colleague of his. Every co-worker in his same grade is an apparent competitor. There is an inherent psychology at work here which encourages only one’s own welfare. There are managers who manage other managers and the system reflects an immensely complex power structure.

Another major aspect with this particular industry is its heavy use of ‘management jargon’. The individual is just a ‘resource’ who is utterly dispensable. People pay the price of their ‘dignities’ for continuing to grind away as a ‘IT professional’ as people euphemistically put it. There is an unbearable pressure to conform to ‘values’ of their respective companies.

In India, most of the jobs that are outsourced are quite rudimentary and doesn’t need high levels of IQ or skill. The archetypical worker in IT needs to be submissive, obedient and any sign of an urge to be independent or creative is put down in no uncertain terms. The training given to fresh recruits is one of the major steps in ‘moulding’ the recruit according to the companies needs. This includes the way one talks, sits, eats, walks etc. It is a complete crash course in ‘manners’. The initial investment on a recruit is therefore, vital to companies in India. For most of the jobs in India, any ‘English speaking individual’ with an average academic record is the most preferred stereotype.

The whole hullabaloo over the IT workers being ‘knowledge workers’ and privileged is extremely misplaced. They merely perform very repetitive tasks with utmost vigour and are deludes into thinking that they are doing something independent and wonderful. They are yet to grapple the fact that they are utterly dispensable and there are other just waiting to replace them.

Due to their tenuous position, any show of dissatisfaction will eventually end up with the individual being dismissed. There are thousands ways of doing away with an individual worker and doing this is not a very hard thing to do for the management. They would also augment their position by making an example of this worker (‘indiscipline, dissent or negativity)

What about the future?

For the jobs to remain in India, the workers have to keep eating some ‘humble-pie’ over wages and realistically speaking, any consistent wage increase over a period of time is impossible under this ‘outsourcing model’.

What is the reason for the apparent self delusional qualities prevalent among the IT workers of today and the incredible certainty with which they view their future? Why do we seldom find professionals of today ‘aware’ of things happening around them? What will wake them up?

Is the answer for this unconditionally bound with the wage structure in place? Or would they understand and empathize with other workers (salaried as well as non-salaried class) only if they lose their jobs and their cock sureness of tomorrows? What is the role of popular culture in keeping these professionals just ‘resources’? These are questions that are yet to be answered.