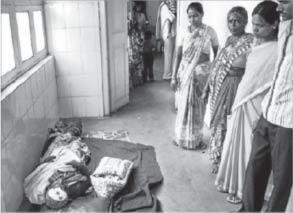 During the 2011 budget, when the Indian GDP is estimated to increase by 37% from 2009-10 to 2011-12, the allocation for the health ministry for the various public health oriented national disease control and prevention programmes has gone down by 14%. The Indian ruling class are only concerned on protecting their vested interests and the interests of the private health care industry.

The very notion of Universal healthcare in India is a cruel joke on the vast majority of its people, where the so called free and universal health system is underfunded, understaffed, undersupplied with medicines and surgical equipments and does not meet the basic minimum standards.

The average spending by ordinary people for procuring medical care in hospitals is already a large percentage of their earnings. The situation is even more worse to those poverty stricken and impoverished people in remote areas as there is a general lack of a functioning government healthcare system and the private healthcare provides are obviously located only in urban areas, as there is no money to be made in rural areas.

To frame a public health policy, to create supportive environments like public parks, fitness and sports centres etc., to engage with communities to identify their health priorities subsequently enabling them to fulfil their health needs, to educate individuals to fulfil their health requirements and finally diverting more resources into prevention and disease control; all of these needs heavy investments.

A radical budget allocation into public health care is vital. The recent budget allocations for healthcare particularly public healthcare, which is a meagre 1.4% of India’s GDP, proves that the government have no serious intentions to change this trend. This only leads to substandard delivery along with increasing inadequacy to meet healthcare demands of a growing population. At the same time, it has given rise to the exploitative private health sector to establish itself. The health care sector in India is already in the radar of global business corporations, that is today worth $ 40 billion.

Apart from Kerala, majority of the regional governments have so far only paid lip service to the Indian constitution, that speaks about the importance of public health. This insensitivity on part of the government can only be reversed by mass struggle of the working people and youth for quality public healthcare as part of the overall struggle for universal social security and welfare measures. For eg., in Kerala, organised working people and educated, socially aware young people and also because of raised political consciousness, is the main reasons for the higher human development index and life expectancy there.

This government, like all the previous ones, have been consistently considering social spending as an unnecessary burden, but vital tool for electoral politics. The most immediate need of the hour is for the government to increase the allocation of funding according to the health care needs of the people. However, this government which is tool for business interests is incapable of meeting this urgent needs and will forever protect only their vested interests. Thus, the need for a political, socio economic alternative and a true working class alternative to the ravages of Capitalism-Landlordism.