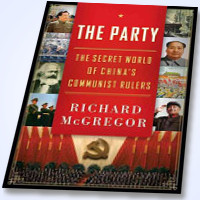 RICHARD McGREGOR previously worked as the China correspondent for the Australian. This book is a summary of his observations of how the role of the Chinese Communist Party (CCP) has evolved over the last decade. McGregor does not come from a Marxist or even a left standpoint. Nor has he made, even from a capitalist point of view, a serious study of the Stalinist states that existed in the past. For example, when he wants to give a definition of a ‘Leninist’ state he approvingly quotes the characterisation of arch-reactionary ‘historian’ Robert Service.

Nonetheless, this book gives important insights into China today. It does not attempt to definitively classify the character of China’s state or economy, although he does refer to it variously as “state capitalist”, “a hybrid market economy” and as “both commercial and Communist at the same time”. However, as McGregor says himself: “The book has no pretence to being comprehensive or definitive. It is simply the story of a curious journalist opening, or trying to open the system’s many locked doors, and looking inside”. In doing so he has written a book which is valuable for all those studying China today.

It makes many points which provide further evidence that China is a state and economy in transition. Under Deng Xiaoping, the regime abandoned the centrally planned economy and has allowed increasing scope to capitalist market forces. China is headed in the directed of a more fully developed capitalist economy, but the process is far from complete. In fact, the world economic crisis has slowed, if not temporarily halted, the process.

One of the themes of the book is the growing confidence of the Chinese regime in its own ‘unique’ system following the onset of the world economic crisis. It begins by describing a meeting between foreign financial advisors to the Chinese regime and members of the Chinese Politburo in 2008. The book describes Wang Qishan, the vice-premier in charge of China’s financial sector, breaking the normal script in such meetings of saying neutrally, “This is what you do, and this is what we do”, and instead crudely declaring to the western advisors: “You have your way. We have our way. And our way is right!”.

McGregor explains that the confidence of the regime was not without foundation because “when the credit crunch hit the global economy in 2008, China was better equipped than just about anywhere to withstand the sudden downturn”. He describes the role of the Chinese banks in the state stimulus packages introduced in the wake of the crisis, which he argues were on a qualitatively different scale than any other country. “The behaviour of Chinese banks was instructive compared to their counterparts in the developed world. Many western banks were by that stage controlled directly by their respective national governments. In Washington and London, the US and UK administrations were imploring financial institutions to restart lending to revive their respective economies, but they possessed few concrete tools to force them to do so. In China, by contrast, the banks were both state-owned and state-controlled. When the party directed banks to lift lending, the senior executives had a political duty to comply”.

In McGregor’s view, this is related to the unique characteristics of China. As he says: “peek under the hood of the Chinese model, however, and China looks much more Communist than it does on the open road”. By this he means the key role that the CCP continues to play not only in the Chinese state, but also in its economy. He describes the many ways in which this is disguised, stating: “When it interacts with the outside world, the Party is careful to keep a low profile”.

For example, McGregor explains that many in the west misunderstood the selling off of the big state enterprises in the 1990s as western-style privatisation. He tells a story of how George Bush Snr asked Zhu Ronii, in charge of China’s economic policy at the time, how China’s privatisation programme was proceeding. When Zhu responded by saying “China was corporatizing its large state assets, which was just another way of ’realizing state ownership’,” Bush Snr gave a “nod and a wink, saying that no matter how Zhu described the process, ‘we know what is going on’.”

McGregor correctly argues that Bush Snr. had misread Zhu, even though he was on the most pro-market wing of the Chinese regime, and that the reality was far more complicated. He explains that the ‘privatisation’ of the large state companies resulted in the undermining of workers living standards but it did not result in the CCP relinquishing control of the key companies.

McGregor repeats Zhu’s blueprint for state enterprise at the 1997 CCP congress – “grasp the big, let go of the small”. He sums this up as meaning that: “The Party and the state would retain control of the large companies in what were deemed strategic sectors, such as energy, steel, transport, power, telecommunications and the like. In a formula that was rolled out for scores of state companies, a small number of their shares were listed overseas, while the government kept about 70% to 80% of the equity in its own hands”. McGregor adds that “Zhu’s policy still largely holds today”.

The CCP’s role in companies is, he explains, largely hidden from the west. For example, “the bulging prospectuses used to sell Chinese state companies ahead of their offshore public listings are crammed with information from every conceivable angle about their commercial activities and board roles, but the Party’s myriad functions, especially control over top personnel, have been airbrushed out altogether”.

McGregor quotes a “prominent Chinese banker” on the decisive role that the CCP continues to play in the state companies: “The idea that the boards ‘really run companies is basically as credible as the constitutional guarantee of free speech and religious freedom in China. It does not happen in reality’, the banker said. ‘At all the major state companies, the party meetings are held regularly before the board meetings. Operating costs, capital commitments and the like are discussed at the board meetings, but personnel remains in the hands of the party. No matter how many independent directors there are and what oversight they provide, at the end of the day, if all management are appointed by the Party, nothing will change’.”

McGregor illuminates some of the contortions through which the Chinese regime has gone and is going through in order to try and introduce capitalist relations into the economy while maintaining control from the top. He looks at how, when Chinese state companies began to be listed on foreign stock exchanges, the regime was anxious to send a clear message to the markets by giving its own executives stock options in the same way as private companies in the west did. However, all was not as it seemed, the options were never meant to be exercised: “Rather than a tool to create executive incentives, the Chinese options were a calculated ruse to ensure that the state got the highest possible price from selling the shares offshore. The options were held in the name of the executives, but were supposed to remain the property of the state”.

However, in the stock market boom at the start of the century, some executives began use their legal right to cash in their stocks: “by 2008, a small group of executives at China Mobile had cashed in options worth US $1.5 billion”. However, the careers of the top executives, who were directly appointed by the CCP, depended on them not cashing in their shares. This gives an indication of the kind of open splits that can develop between different wings of the bureaucracy at a certain stage.

McGregor correctly points out that “The gap between the fiction of the Party’s rhetoric (‘China is a socialist country’) and the reality of everyday life grows larger every year. But the Party must defend the fiction nonetheless, because it represents the political status quo”. He gives many examples of the irritation of representatives of the Chinese regime at having their policies interpreted as an attempt move towards a simple copy of western capitalism and, particularly since the start of the world capitalist crisis, a dramatic increase in the propaganda by the regime proudly emphasising the differences between China and the rest of the world.