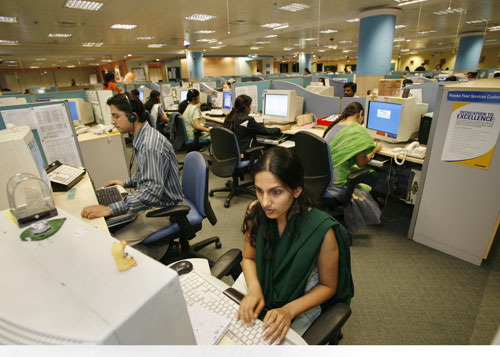 The following article is by Jeyan, an IT employee working with a software firm in Bangalore, a close supporter of New Socialist Alternative (CWI-India). He has penned his observations on the prevailing bad working conditions in the Indian software industry which is often glossed over not only by the corporate controlled media and the pro -IT industrialist Governments, but even worse by all the main TU’s that have hardly ever bothered about this potential sector.

With the world economy in deep crisis, the IT workers have started to feel the pinch and it will only be a matter of time before the the much admired IT bosses begin show their true colours as nothing more than profit racketeers. We have the experience of 2008 when they came down on workers post the Satyam computers scam.

The neo liberal regimes in India, in various states as well in centre, irrespective of the ideological positions of the parties in power have meticulously created these artificial islands of “knowledge workers” to separate them from other sections of workers engaged in struggle for the precise fear of what it means in terms militancy edge if these educated youth join the ranks of the overall working class struggles for emancipation from wage slavery.

We also feel that the labour movement can be galvanised by bringing in these fresh layers in to struggle, as all these workers who are predominantly young men and women are very well equipped to grasp the political realities and complexities given their knowledge of technology and the Internet through which the methods of organisation and struggle has seen a sea change in the recent period.

From Tahrir Square in Egypt, to Occupy movement in USA ,the anti corruption movement in India included, there can be no doubt that the IT youth have played a phenomenal role in the organisation of massive protest actions. There talents if properly utilised can be of an enormous advantage to the struggle against the system of capitalism itself.

New Socialist Alternative (CWI-India) has spoken many a times through its campaign leaflets and TV debates on the need for a democratic unionisation, as the only way forward for the IT workers to fight for better working conditions and also to win the fundamental rights of Trade Unions to organise in their workplaces and strike if need be.

Only this way can the IT youth can gel their social weight within the society and strive along with other radical sections who are fighting to establish a system of social equality, with out any form of oppression based on class, caste, gender,sexuality nationality, language and religion.

Knowledge workers need to use their knowledge to fight back

Information Technology (IT) industry is said to be India’s great export, the measure of India’s superpower status, the means through which India, according to its vocal supporters, will eradicate poverty and bring ‘development’ to all. Every year lakhs of young engineers from colleges all over India and all branches of engineering (usually subsidised by the public money) enter this industry. The jobs here are supposed to be among the best paying jobs in India. An IT job is considered a passport to a good and wealthy marital partner (thanks to the obnoxious News Paper marriage adverts with casteist feudal thinking ) or a good life in the here where software jobs fetch higher incomes.

There are two main kinds of IT companies: product companies (such as Microsoft or Amazon, which make their own software products) and service companies (such as Infosys or TCS or Wipro, which sell software services to other companies, many of which are clients based in US or Europe, willing to outsource a part of their business process).

But behind this rosy picture being presented to us, life in this sector is far from glossy. It is not only the cause of brain drain phenomenon in India when an Indian software engineer migrates abroad but also brain drain from other engineering faculties and skilled fields to the IT sector.

In India since the labour costs are low and the availability of huge numbers of English speaking and skilled graduates, most big software companies from the US and Europe are taking advantage of this situation. In this game of deceit to drive down the wages and exploit the unemployment situation, big companies held by by Indian nationals such as Infosys, Wipro, Tata Consultancy Services etc., have their brimful share of sin, but the abysmal levels of wages in other industries and the general levels of poverty has turned these villains in to heroes.

The main centres of IT concentration in India are mainly in the urban centres such as Bangalore, Delhi (including Gurgaon and Noida), Hyderabad and Chennai, and others like Pune and Kolkata but has had no impact whatsoever in the vastly underdeveloped regions of the country.

It is interesting to note that entry level salaries for most freshers have not increased very much in the last 10 years, even though inflation is rising steadily and house prices etc. are all rising. The range in the big service companies like Infosys is still something within Rs. 3 to 3.5 lakhs per year. There also exists a kind of class system in employees depending on which university they are graduated, with graduates of premium institutes like IITs getting preference for recruitment and promotions. Added to that is the omnipresent but never acknowledged caste bias, with people from lower castes being discriminated against frequently and caste driven social exclusion which is the malady of the Hindu religion is rampant in this sector as well.

Working hours in the industry are 8 hours a day, merely on paper, but in practice vary between 10-12 hours or more in different companies depending on the project pressure, with employees having to work on weekends and holidays as well, with little free time left. Overtime pay also varies with company, with some firms providing none. Annual holidays in Indian IT firms are much less than those in Europe, with only 12 days a year in some companies, for which permission may again not be granted depending on project deadlines.

Since the reason most foreign companies set up offices or outsource their business here is primarily because of lower wages compared to the west, service companies are eager to cut corners as much as possible by settling for unreasonable deadlines with foreign clients, for which the final squeeze falls on the employees. There have also been cases of suicides among the IT workers mainly due to unreasonable work pressure, targets and deadlines.

The assessment system in these companies is also frequently a case for woe, with promotions and bonuses dependent on the employee going through a set of training courses online which are mostly irrelevant to their work, leading to much frustration.

Not to forget are problems like RSI or repetitive strain injury due to bad typing posture and back problems due to sitting in front of a computer non stop for hours. The work stress also causes social problems like marital disputes where both the partners are IT workers working long hours.

Apart from those in the IT sector, the call centre workers in the BPO or business process outsourcing industry also face many similar or even worse problems. Chief among them is the tyranny of shifts, where they have to work in 8 hour shifts that are rotated throughout the week. So a person could be working in the morning today and the night tomorrow, putting their sleep cycles into disarray and being completely unable to plan anything before they know their shift rota.

While young women employees in the IT enjoy relatively better gender equality status with their male counter parts, but for many the return home in the late hours after the unearthly night shifts has turned into a nightmare. There are umpteen number of rape & murder cases reported in all the so called Silicon Valleys of India.

The infamous Prathibha Murthy murder in 2005 in Bangalore, drew attention and exposed the callous attitude of the IT mandarins who are only interested in the Moolah they rake in, but when it comes to the life & safety issues of the workers in their companies, they are far worse than the feudal landlords.

Added to that is the stress from receiving persistent abuse from foreign customers, some of whom are racist or simply angry at the companies and hence the poor call centre workers are targets for their anger. Lack of training of the Indian workers with the foreign accents of their customers often causes communication problems with the workers becoming hapless targets of the customers’ ire.

Union for Employers, Not Employees!

In India, there is an union for IT employers (called NASSCOM) but none at all for the employees. NASSCOM has been rumoured to operate a black list for rebellious employees, such that if anyone had been fired because of this, no big software firm would hire them.

Due to these and many other IT specific problems, many IT employees try to escape this by leaving and joining other companies (where the same cycle repeats itself) or by trying to seek managerial positions through MBA’s or posting abroad where work conditions and salaries are better.

Dissatisfaction often leads to bad work quality and the assessment system only causes loss of teamwork, with each IT worker competing with one another for better positions and thus there is a lack of unity among the IT employees in fighting for better working conditions. Added to that is the unnatural hours of working to the different time zones of their American or European clients during conference calls and out of hours support calls, leading to sleep problems and other health problems.

The missing element in all this, as pointed out repeatedly, is the lack of a fighting union among the IT workers which can make all the difference to the individualistic driven and often highly exploitative conditions in the Indian IT sector.