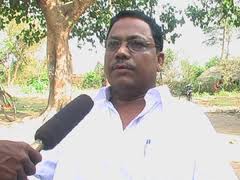 It is a matter of great concern that Odisha government in order to push forward the POSCO steel project at Dhinkia and Gobindpur near Paradip port has once again arrested the leader of the anti-POSCO resistance movement – POSCO Pratirod Sangram Samithi (PPSS) and CPI leader, Abhay Sahoo. The arrest comes after years of heroic resistance put up by the peasants and fisher folk of Dhinkia and Gobindpur against all attempts by the Odisha government and POSCO hired goons to take away their precious land.

Abhay Sahoo was arrested on 25th November when he was travelling from Paradip near the proposed project area. Currently his bail plea has been rejected and has been remanded for 14 days in judicial custody. Abhay Sahoo has many cases pending against him which are mostly false cases and was forced to take refuge in the villages of Dhinkia and Gobindpur for the last 5–6 years as the villages has remained out of bounds for the government since the resistance began. The government had arrested Abhay Sahoo before in October 2008 for his role in the anti-POSCO movement and was released on bail in August, 2009. All the villagers face arrest if they dare move out of their villages.

The government has acquired about 2000 acres of mostly forest land around the area by use of brute forces and still needs another 2000 acres as required by the project. The last remaining bastions are the villages of Dhinkia and Gobindpur whose people are continuing to resist all attempts by the government to throw them off their lands. Recently the government in the name of constructing a coastal road towards Dhinkia charged against the villagers with the help of POSCO hired goons backed by the police but were once again repelled by the villagers under the leadership of Abhay Sahoo.

While the government of Odisha has been branding false cases against anyone trying to oppose POSCO, it is matter of record that all the actions till date by the government of Odisha against the protestors is totally unjustified as the entire project stands on shaky grounds. Neither has the MoU with the government been renewed by POSCO nor is the project in accordance with the so called democratic laws of the land. The project gained illegal clearance by the Environmental Ministry and was totally in violation of the Forest Rights Act (FRA), with the project yet to clear the
cases pending against it in the courts and other governmental panels.

POSCO must get out of India

Meanwhile, the news of Abhay Sahoo arrest is starting to spread around. But the statement of the CPI General Secretary A B Bardhan made a pathetic reading. While condemning the arrest of the CPI leader, Bardhan told the media at Paradip that “..an ideal site is available just a few kms away from the present site which is relatively barren and unsuitable for agriculture and fishing activities.” (Business Standard, 28th November) Caught as they are they are in a time warp and also in a alliance with the BJD in both the centre and the state, the CPI leadership is trying to make light of the issue by reducing it to a question of land allotment.

The entire POSCO project, as the protesters have very well understood, is not merely a question of land allotment but it is an economic one. The people of India have nothing to gain from the so called largest FDI billed at Rs. 52,000 crore as the terms and conditions negotiated by both the Central and the State government points to complete surrender of the natural resources to POSCO, with impact on the environment and exploitation of labour, land and other resources.

We are therefore demand:

Release Abhay Sahoo immediately and drop all false charges against him!

An immediate halt of the police action against innocent civilians, fisher folk and poor peasants and the withdrawal of police forces from the whole village area!

Rebuild, with full compensation, any homes and farms lost

Immediate scrapping of the POSCO project from Odisha!

We call upon Trade Unions, Political parties/Organisations nationally and internationally to show Solidarity by protesting this arrest and attack on anti-POSCO movement

We extend our complete solidarity and support in the people’s movement against POSCO – the workers, peasants and poor villagers who are struggling to defend their land, homes and livelihoods against this violent and brutal assault being carried out by a big capitalist conglomerate in league with the state and national governments. We ask you to do the same.