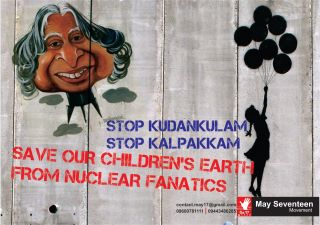 The following article is written by an activist of the May Seventeenth Movement and also a close supporter of the New Socialist Alternative (CWI – India). It is based on a report from a seminar in Madurai during the anti-nuclear yatra to Koodankulam that took place recently.

The anti-nuclear movement is starting to gather some momentum in India, particularly after the experience of the anti-nuclear protest at Koodankulam that has become a source inspiration for all those fighting against the nuclear madness that has afflicted the Indian ruling class. Unable to take the protesters head on, the Indian ruling class has started to deploy all its witch doctors, from nuclear fanatics like Abdul Kalam (who has gone on record to state that the reactors are 100% safe!) to the spread of misinformation that the protest is being funded by foreign sources and organizing pro-nuclear rallies in Tamil Nadu.

As the saying goes the proof of the pudding is in the eating, the only foreign collaboration or funding if any is the deceitful role of the Indian government in acting as a market for polluting and destructive technology of multinational corporation and foreign countries, which is finding no takers in their own part of the world. As the protest at Kudankulam shows no sign of relenting and with tactic support of the AIADMK government in Tamil Nadu (for its own populist reasons), the Indian government is increasingly finding itself corned on all sides.

The crying need of the hour as indicated by each and every struggle of the Indian people is the lack of a combative democratic political alternative. Only the formation of a new mass political party of the working people which can draw the strength from all the struggling sections and pro-people movements can fill that conspicuous vacuum.

The southern tip of India has lately witnessed a widespread protest against commissioning of a nuclear power plant in Koodankulam. Not just the activists but the whole of Idinthakarai village (site of the plant) is up in arms against the nuclear plant. The protests which had started right from the day the agreement was signed between Russia and India in 1988, as people’s concerns fell on the deaf ears of both the state and the central government.

After the Fukushima disaster, the movement has got the widespread support among the people of Idinthakarai, Koodankulam, Chettikulam and all the nearby villages. To express the solidarity support to this struggle and also to register their protest against the nuclear establishment in the country, a national level yatra was organized from Madurai to Idinthakarai/Koodankulam recently. The yatra was organized by National Alliance of Anti Nuclear Movements, a forum of various anti nuclear organizations from all across India.

The most eminent intellectuals, nuclear scientists and anti-nuke social activists from all over the country had arrived in Madurai on 10th of November. A national seminar was organized in Madurai under the title “Is Nuclear Energy the only Solution for the Energy Crisis?” by Gandhi Smarak Nidhi.

The crowd was welcomed by K.M.Natarajan, Chairman of Gandhi Smarak Nidhi , who said that the government is not telling the truth about the effects of Nuclear waste and it is yet to disclose the details of how the nuclear waste will be disposed as the radioactive decay would last for more than 25,000 years. 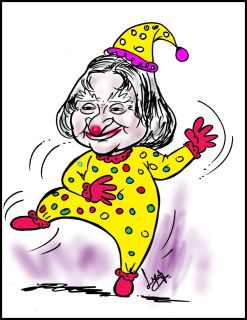 The renowned Mathematician and Gandhian, Banwarilal Sharma said that if a mathematician commits a mistake, it’s excusable. But if the so called rational scientists commits a mistake it is totally inexcusable as its consequences are unimaginable and they have to be responsible for that. He added that scientists in the world today continue to lie that nuclear energy is safe and secure.

Commenting on Abdul Kalam’s (nuclear scientist and former President of India) assurance of 200 crore rupees worth welfare measures to the Koodankulam people, he said that he is trying to bribe the people to keep them quiet. Ridiculing the Kalam’s statement that nuclear energy is the gateway to the progress of the country, he questioned that most of the countries are closing down their nuclear establishments and moving towards the renewable energy resources, but why is India is so much obsessed over Nuclear Energy?

Answer to that he said was because the country is being run by the corporates. Every nuclear plant is being planned just to serve the interest of the foreign countries. He suggested that instead of going for nuclear energy which puts the lives and livelihood of the people in danger, we can go for other alternatives like Tidal energy, Wind energy, biomass and others. He concluded that the while development is needed but it should not be for the benefit of corporations, which has to be rejected at any cost.

Thomas Kochery, the organizer of National Federation of Fish workers, Trivandrum slammed Kalam’s statement the day before that nuclear energy is the gateway to prosperity. “It is the gateway to the prosperity of the MNCs, rich people and the politicians at the expense of the vast majority of the people.” In reply to the Kalam’s statement that Koodankulam plant is 100% safe and secure, he ridiculed that when Government of India and Government of Madhya Pradesh failed to prevent the Bhopal Gas tragedy in 1984, how can they ensure the safety of the Koodankulam plant.

He also added that Kalam has made a paradoxical statement that Germany is closing down their nuclear plants because they have exhausted the nuclear material. But the truth is that it has realized the ill effects of nuclear plants after the Fukushima disaster. He concluded that all the anti-nuclear movements have to remain united and fight till the nuclear establishment in the country is shut down.

Suvrat Raju, a theoretical physicist from Allahabad University, said that arguing that nuclear energy is India’s ticket to modernity and prosperity is not just a wrong and inaccurate but also clichéd. Nuclear programme in India started 50 years back by Jawaharlal Nehru who compared Atomic Revolution with Industrial Revolution.

He commented that India’s nuclear programme has been a complete failure. He recalled that Homi Bhabha said that by end of the century all the power plants will be nuclear, but it took 35 years to build the first reactor. He remembered that as per the report produced by Controller and Auditor General, out of 5,600 crores spent on the first reactor, the total energy produced was NIL. This is not because of the lack of support from the government or Dept. of Atomic Energy (DAE) or something else, but nuclear energy programme itself was a colossal failure.

He stated that every nuclear reactor has sure and finite probability of undergoing a catastrophic failure. That too there is a known problem in the control rod mechanism of the reactors which is being installed in the Koodankulam plant. He said that “We can use a simple test to understand the safety of the reactors. If the reactor vendors are 100% sure about their safety, why can’t they take 100% liability? If they are not ready to stake their financial health, why should the people risk their lives?”

History of the Koodankulam Struggle

Y David of PEAL briefed on the history of Koodankulam struggle. “When Korposav and Rajiv Gandhi signed the agreement for Koodankulam power project in 1988, immediately the protest started in southern districts of Tamil Nadu. Many organizations such as trade unions, youth organizations, fishermen, peasants took part in the protest. In 1989 there was a big rally organized in Kanyakumari where more than 10,000 people participated. In 1990, due to Soviet Union break-up the project was put down. In 1997, the then PM Mr. Deve Gowda went to Moscow and signed the same agreement. The protest was started immediately and from then onwards the protests has been continuously going on. No political parties in Tamil Nadu took up this issue.”

He added that “The state government, central government and DAE completely ignored the people concerns. But now after the Fukushima incident they are forced to open their mouth.” He urged for a change in nuclear policy. He concluded that Koodankulam struggle has not only raised the specific power plant issue but the whole nuclear programme itself and it has to be taken up nationwide.

He added that the nuclear energy constitutes just 0.7% of primary energy while the Bio-Mass constitutes 31%. For a mere 0.7% energy requirement, why are they putting generations of people in danger. He suggested that India can go for Solar energy with abundant sunlight available for more than 300 days. He said that in Rajasthan more than 1 lakh sq km has very low population and if they install 50 solar panels each with 35MW capacity, we can generate 17000MW of electricity. He said that only 28 – 30% of the nuclear energy is converted into electricity and the rest are dissipated as heat which affects the environment too. He demanded the government that it has to increase the subsidy for renewable energy resources so that it is cheaper, cleaner, environment friendly and safer than nuclear energy. 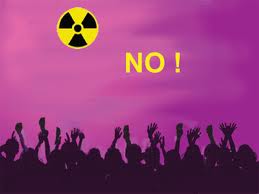 It is time to be Active, not Radioactive tomorrow!

Neeraj Jain from Lokayat said that “In Jadugoda were uranium ore is mined, the radioactive elements are released into atmosphere, and almost every first generation miners are dead. So far around 20 – 30% of uranium miners have died in US and they still continue to die.” The Chernobyl accident has contaminated around 1lakh sq miles of area which is almost twice the size as Tamil Nadu. He quoted a report that more than 2 million people have died in the past 20 years because of the radiation from the Chernobyl accident.

Muthukrishnan, writer and activist stated that most dangerous nuclear reactors are in India. He also said that in the uranium mines of Kaiga, Karnataka, countless number of people have been affected by radioactivity. In Fukushima around 200 kms area have got affected and almost 10 lakh people are expected to get cancer in next 10 years. He also questioned the government’s nuclear policies and demanded a strong protest against all the nuclear plants in the country.

After the seminar, the yatra started towards Koodankulam. On the first day night, the group reached Idinthakarai. The group was received and welcomed by Dr. SP. Udayakumar, co-ordinator of People’s Movement Against Nuclear Energy (PMANE).

On the second day, a huge one day hunger strike was organized in the nearby village of Chettikulam. The yatra crew participated in the hunger strike and explained the ill effects of the nuclear plants and also talked about the other alternative sources of energy. A crowd of almost 10,000 people participated in the strike and everyone was sitting in their place right from the morning till the evening without even a single drop of water.

Then next day the yatra passed by Nagarcoil and Tirunelveli to spread the awareness about the ill effects of the nuclear energy and the yatra culminated at Chennai with a press meet and a seminar.