On September 27, 2021, protests and rallies were held across the country in response to a call to observe ‘Bharath Bandh’ by the United Kisan Morcha(United Peasant Front). The Bandh unequivocally condemned the recent draconian laws on agriculture brought in by the BJP/Modi-led government. There was widespread support for the bandh all across India. In some cities, roadblocks, rail blockades, and in some states, markets, shops and offices were closed.

Protests against the Modi government’s draconian agriculture laws, have been going on for over 10 months across the country. Thousands of farmers in Delhi, Haryana, Uttar Pradesh, Punjab, Maharashtra and other states are constantly protesting for the repeal of the black Agriculture Acts and the demand for legal guarantees for minimum support prices(MSP). In spite of the cold, rain, wind and corona virus the peasants are on a warpath. More than 700 farmers have been martyred and the farmers’ struggle has reached a ‘Do or Die’ stage. Farmers leaders said that the protesting farmers’ union’s September 27 Bharat Bandh received an unprecedented response. 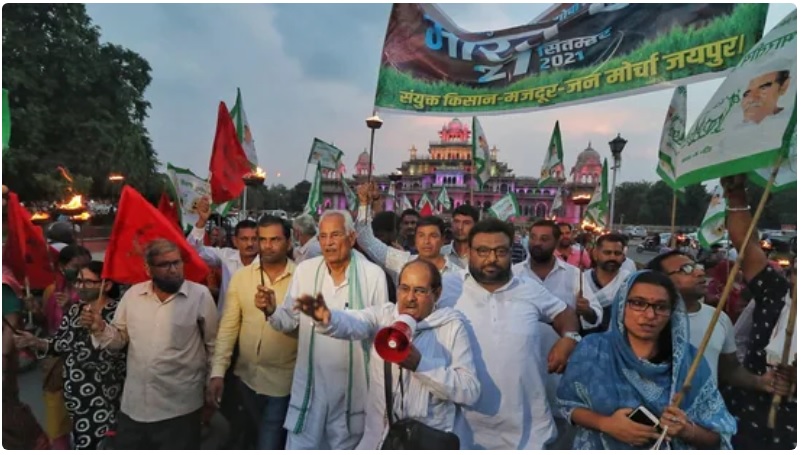 The Modi government, which enacted these anti-peasant agriculture laws to protect the interests of a handful of selected corporates, is insisting having its way and pauperize the farmers. But, the farmers’ unions and their united forum said that “It had made the firm decision not to go home ʼ until the black agriculture laws were repealed.
The ʼBharath Bandh held on September 27 against the anti-people policies of the Central Government from the point of mobilising a massive support to the cause of peasantry, and was successful in popularising the coming protest on day of November 26, 2021, the Working Class of India also expected to join the struggle to ensure success.

‘New Socialist Alternative’ supported the farmers’ struggle demanding that the demands of agricultural labourers be met and the repeal of black agricultural laws is immediately effected. On the day of Bharath bandh and in previous struggle, and mass actions, members of the ‘New Socialist Alternative’ in the cities of Bangalore, Chennai, and Pune actively campaigned and distributed leaflets in industrial areas, residential areas, and protest marches of workers and demanded that the working class should support the farmers’ struggle.