Migrant workers from North India in Tamil Nadu’s Coimbatore, blocked roads and broke the new curfew demanding that food, shelter and sanitary facilities be provided to them. The local administration made vain attempts to disperse them; talk and promises to make the necessary arrangements failed. The city police resorted to charging with lathis (metal covered batons) to disperse the crowds. Once dispersed, police distributed food packets in an effort to temporarily subdue the situation and promised regular supplies to the area.

While the COVID-19 or Coronavirus has been spreading throughout the world, causing hitherto unseen health havoc, the short-sighted government of right-wing Narendra Modi has left no stone unturned to ruin people’s lives amidst this unprecedented health crisis. After weeks of inaction and turning a deaf ear to health experts’ warnings, the ruling regime decided this Tuesday to simply shut down the country for three weeks, wishfully thinking that administrative measures alone would stop the spread of the COVID-19 virus.

As always, as with the demonetisation fiasco of 2016, the BJP’s Modi-led government is absolutely clueless and did not have any kind of rudimentary plan to deal with this health emergency. Its authoritarian, unscientific, insensitive approach to this crisis has caused immense difficulties to the more than 1.3 billion people of India.

The poor, the marginalised and the migrant labourers, in particular, are the most affected as a result of the national curfew. With the entire transport service suspended, we have been seeing scores of migrant workers across the country set out on foot to their native homes (which are almost countries away!) carrying their children on their shoulders and their meagre possessions on their heads.

Coimbatore being the second most industrialised city in Tamilnadu has its fair share of migrant workers employed in various manufacturing and service industries. Most of them are employed as daily wage labourers, staying in makeshift tents and are usually paid on a weekly basis.

The sudden curfew announced by Modi’s thoughtless regime has left them stranded, jobless and hungry. Uncertain about their livelihoods, with growing panic around the country regarding the health crisis and unable to return to their homes, around a hundred migrant workers took to the streets at around 12:30 on Saturday and staged a roadblock protest, demanding the authorities ensure food, shelter and sanitation needs.

Soon the police arrived on the scene and tried to disperse the crowd, promising to address their concerns. Unmoved by the assurance from the police, the workers continued their protest and the police resorted to the lathi-charge to quell the crowd. The authorities then made arrangements and provided food packets for the day and promised the supply of essentials to that particular area.

The inaction of the Modi regime for the past two months when various experts warned of a potential pandemic, its failure to monitor and isolate and quarantine travellers from foreign lands, particularly from hotspot regions, has thrust unfathomable horrors on the working class and rural poor in this country.

Now, as the potential carriers of the virus have spread far and wide, a complete shutdown of activity was the only option left for the regime and they rushed to enforce it without alternative and adequate social and logistical measures in place. Modi and his proxy regime of the AIADMK party in Tamil Nadu did not even have an iota of consideration to the plight of millions (one estimate says 45 million) of migrant workers who are the significant wealth creators throughout this country.

With the loss of livelihood, uncertain about their economic future, fearing deterioration in their health condition, being unable to travel back home has meant increased instances of clashes with the police. We urge all left and working-class forces of the country, particularly the trade union federations aligning with the Left/Communist parties to mount pressure and demand the ruling governments take immediate steps to address the issues of the workers, rural and urban poor and the working-class people as a whole.

Migrant workers or local workers, unionised or non-unionised, urban or rural, we the workers are a class who will stand united to thwart any attempt to divide our class that creates all the wealth everywhere.

We will struggle and demand: 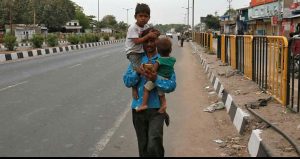