We strongly condemn the attack on the IIT Madras Scholar Sooraj! The PhD student was thuggishly beaten up for organising a beef-eating protest to resist democratically the authoritarian restrictions of the Modi’s saffron regime over the cattle-trade. While this legislation is a clear breach on the individual liberties such as choice of food, the cattle trade restrictions are also a serious blow to millions and millions of livelihoods; particularly affecting the marginalised communities involved in the retail beef trade, leather industries, tanneries, etc. At the same time this act is not seriously touching upon the multi million dollars worth beef exports by the large slaughter houses run by rich businesses. This shows the hypocrisy of this government while imposing its over arching ‘hindutuva’ agenda of beef ban amongst ordinary people and simultaneously protecting the interests of the big business involved in beef exports.

There were numerous campaigns and protests across India particularly from Kerala and Tamil Nadu. And the Madurai bench of the Madras High Court has put on hold the Centre’s restrictions on the cattle trade after hearing a petition saying that the legislation violates the basic right of a person to choose what he eats.

On this backdrop for the past few days progressive and left activists were organising beef fest all over along with an extensive social media campaigns etc. Of course these irked the reactionary outfits of sangh parivar and others. The local BJP units and other Hindu fundamentalists organisations announced counter protests of ‘pork eating’ to offend the Muslim communities and in fact the saffron gangs warned that they will enter the campuses if there are any beef-eating protests organised by the students.

When the complaints were taken to the university management over harassment of the ‘students democratic rights’ though some actions were taken against the thuggish intolerance of the reactionaries it’s often the case that both the parties will be given a warning. It is an appalling practice from the university management to give severe warnings to those who are affected and genuinely lodging complaints. Even this time the right wing supporters have filed a counter complaint against Sooraj who was the victim himself.

Again we condemn this growing intolerance among the sections of students and the youth who are supposedly the social force to uphold progressiveness. It is also the reflection of the growing influence of the reactionary right wing forces across the country spreading intolerance and communal hatred amongst the young minds.

We want to clearly register these attacks as a total infringement of the students democratic rights in the campus to organise and protest to secure their rights. The students who protested against the restrictions on the cattle trade got every right to do so, as it will directly affect their food choice! And it is the duty of the university management to safeguard the campaigning students and their democratic right to protest. 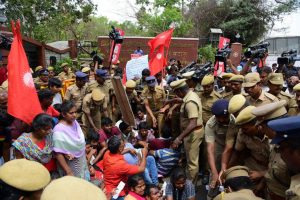 There are ongoing protests by the students in IIT seeking justice for Sooraj and there are solidarity protests outside the campus being organised by various student organisations from different colleges and universities. Even now there are reports of police attacks against those protesters.

The New Socialist Alternative is in solidarity with the students who are protesting against the attacks. It’s important for all the students and teaching associations across India to condemn this incident and support the democratic rights of the students. Apart from the immediate demands of securing justice to the victim, and to ensure protection of the student communities including their democratic rights, we also want to raise the demand for ‘joint action committees’ to be formed by all the left and progressive students groups – open to all other supporting students. This will unite the students who are so far operating as separate entities and sects!

It’s true that the left and progressive students are all united around this issue and protesting now against this violent attack. This should still be advanced by an organised method of united action to perpetuate this unity against the appalling audaciousness of the right wing forces!