The hashtag in a way symbolizes AAP’s stunning victory in the Delhi Elections winning 67 out of 70 seats in the state assembly. It shows that neither corporate money nor media influence is a guarantee to victory, especially in times of heightened expectations amongst the working people. While opinion polls and critics alike clearly saw an AAP victory coming, but nobody expected such a near decimation of the BJP, left with just 3 seats and a duck for Congress! read more 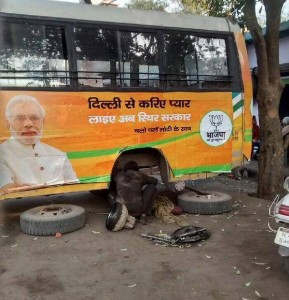 With the final campaign phase for the much hyped Delhi elections drawn to a close, voting having begun and as the eager wait for election results begins, the political landscape has been completely transformed over the past one month. A few months ago what may have been declared as a straight forward win for the BJP seems to have made a abrupt turnaround by pointing in the direction of the resurgent Aam Aadmi Party (AAP). A series of political miscalculations by the BJP and the politics of the ridiculous pursued by the forces of Sangh Parivar seems to have rattled the middle classes in urban areas especially, putting the BJP on the back foot. read more

There is one definite outcome when head of states of two capitalist nations meet. It’s going to be disastrous for the working class! Obama’s visit to India on the eve of republic day of India has to come to mean the same. For all the talks about “Swacch Bharat” and the need for renewable energy by all the parties be it regional and national, when it comes to nuclear power there is an unanimous support from all sides.

The Indian Civil Liability Nuclear Damage Act 2010 (CLND) has been a thorn in the flesh for the nuclear equipment suppliers. Though the CLND states that the operator will have to bear the liability in case of an accident, the “right to recourse” clause which comes under section 17 of the same act permits the liability to be imposed upon the supplier in case the accident happens because of faulty equipment. read more

In 2004, The Telugu Desam Party (TDP), which was in power for nine years was utterly routed by the people. It managed to win just 47 out of 294 seats. The rout reflected the utter disenchantment of the electorate with Naidu’s policies and his neoliberal model of development. During Naidu’s misrule, rural Andhra Pradesh sunk into deeper depths and saw some of the highest rates of farm suicides in the country. Cutbacks in the public sector triggered massive loss of jobs in the state while Naidu played fiddle with his “IT revolution” in Hyderabad. After 10 years, riding on the back of discontentment of Andhra people with the partition of the state, an utterly discredited Congress, and the promise of a massive farm loan waiver (that won’t be kept), Naidu is back as the Chief Minister in the new divided Andhra Pradesh. read more

Greece: Why did Syriza and the KKE fail to reach agreement?

Syriza has formed a coalition government with the Independent Greeks party, a party that emerged from a New Democracy split and which therefore is a party faithful to the capitalist system and which is penetrated with the logic of the capital and of the “forces of the market”. Syriza’s cooperation with such a party is of course a dangerous trap! read more