New technological innovations are having a huge impact on the capitalist system, a subject explored in a new book, The Zero Marginal Cost Society.

The Zero Marginal Cost Society: the internet of things, the collaborative commons and the eclipse of capitalism

“The capitalist era is passing… [It] has peaked and begun its slow decline… At the heart of capitalism there lies a contradiction in the driving mechanism that has propelled it ever upwards to commanding heights, but now is speeding it to its death…. Intense competition forces the introduction of ever-leaner technology, boosting productivity to the optimum point in which each additional unit introduced for sale approaches ‘near zero’ marginal cost. In other words the cost of actually producing each additional unit – if fixed costs are not counted – becomes essentially zero, making the product nearly free. If that were to happen, profit, the lifeblood of capitalism, would dry up”. (Chapter 1, The Zero Marginal Cost Society) read more

International Day of Action for the Right to Safe & Free Abortion

Yesterday Evening on the Steps of Town Hall, Bangalore we had a very spirited protest event which part of the International Day of Action for the Right to Safe & Free Abortion.

Around 20 people attended the event which culminated in a Candle light Homage to those uncounted women victims and their families around the world, because of antiquated, fundamentalist and medieval laws that oppress women. read more

The following statement is a solidarity message from Seattle City Councilmember – Kshama Sawant to the students of Jadavpur University who were protesting recently against sexual violence and administration highhandedness  in dealing with the protest. 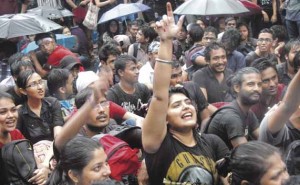 In Maharashtra, election campaigns have risen to a fever pitch. Voting took place on 15th October with about 64% voter turnout and the results will be declared on the 19th itself. This elections is different from the past because both the major alliances, Congress-Nationalist Congress Party (NCP) and Shiv Sena-BJP have ended and all of them have decided to contest independently. read more