Is the Conspiracy Complete?

Abrogating the concept of Planning is a disaster that is coming to hit the poor very hard. Yes, the word Planning in the Indian economy stood on its head and did everything opposite what it was supposed to do.

Mind you, the earlier Indian policy makers, greatly influenced by the spectacular economic strides that were being made by the former Soviet Union through Soviet Five Year Plans (however bureaucratically mismanaged) in tackling poverty, famine and the after effects of war with the 21 armies of Imperialist countries, did choose the concept of Five Year Plans & Planning Commission, to tackle the enormous economic and social disparities in our society. read more 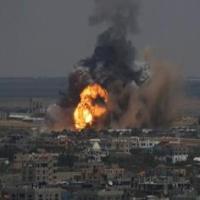 What is the role of imperialism in the conflict?

A hail of death has roared down on Gaza for weeks. Working class people in Britain and worldwide are shocked and angered at images of a Palestinian father carrying his dead children’s body parts in a plastic bag, and other daily horrors from the Gaza Strip. read more