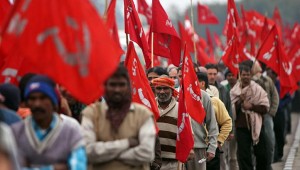 The 48 hour General Strike called by the Joint Committee of Trade Unions (JCTU), comprising of 11 Central Trade Unions, once again saw massive participation of the working class, with over 100 million workers all over India participating in the 2 day strike. The capitalist media struggled its best to play down the effect of the strike, but the strike did see major shutdown in many parts of India and the industry association ASSOCHAM{{1}} estimating the losses due to the strike at Rs. 26,000 crores. read more