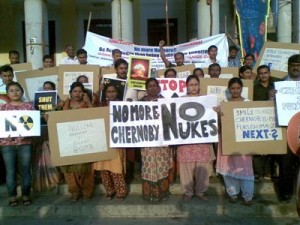 The following news article appeared on the website Newzfirst (http://www.newzfirst.com) covering the recent protest demonstration that took place in Bangalore on 26th April, 2011 led by Peoples Solidarity Concerns – Bangalore, marking the 25th year of the Chernobyl nuclear disaster, in which members of the New Socialist Alternative (CWI –India) played a leading role.  Most of the article is based on the address by Cde. Jagadish Chandra during the demonstration as well as excerpts from the leaflet produced by this campaign. read more 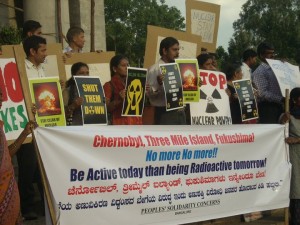 Today’s protest was in remembrance of the world’s worst nuclear disaster that happened in Chernobyl (which was in the then Soviet Union, which now falls in Ukraine) on the 26th of April 1986, which is exactly 25 years ago.

The protest was organized under the banner of Peoples’ Solidarity Concerns, Bangalore, which is coalition of various political, social and Human Rights groups in Bangalore. read more

PROTEST IN BANGALORE ON CHERNOBYL DAY

25 years have passed after Chernobyl nuclear accident. During this period, most of the western countries have stopped building new nuclear plants. India however, is pursuing this dangerous technology in an aggressive manner. read more 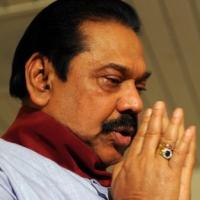 What is the way forward now?

One more election under the Rajapakse administration has been concluded. It finished on 17 March. The Election Commissioner himself, having served for a long time in the post and going into retirement after the election, lambasted the government and President Rajapakse for abuse of his position in the course of the election in his use of the state media and government facilities like vehicles, phones and staff. read more 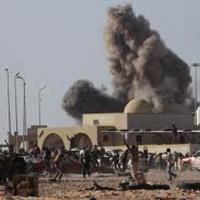 Libyan workers and youth must rely on their own strength

There is little doubt that a bloody war of attrition is being waged against the population of Misarta by forces loyal to the Gaddafi regime.

The Gaddafi regime is relying on brute force to survive, but is able to do so largely because the momentum from the original February uprising, inspired by the revolutions in neighboring Tunisia and Egypt, faltered. Lacking its own independent leadership the movement was effectively hijacked by a combination of pro-western elements and regime defectors who wanted to do a deal with the main imperialist powers. This in turn helped Gaddafi stabilize his rule, at least for now, on a combined basis of terror and exploiting popular fears of losing the social gains made over the last 40 years in fields like health and education. read more